A United States Sports Academy faculty member recently was able to contribute to the success of Super Bowl LI, and at the same time provide some memorable “hands-on” learning to an Academy doctoral student. 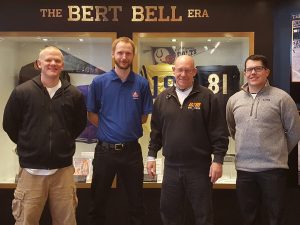 This year Davis shared the experience with Academy student Josh Greer, as part of Greer’s doctoral mentorship program under the guidance of Davis.  Davis brought Greer with him to help oversee fan interactions with famous football players and to volunteer in some of the NFL Experience’s interactive fan activities.

“Josh went with me as part of his doctoral mentorship program,” Davis said.  “This trip was part of the experiential learning program.

“These events are fun to attend, but there is a good amount of work involved,” he said. “The students get good, hands-on experience they can use later on.”

Davis said these activities enriched Greer’s Academy mentorship and provided him with valuable experience in the world of professional sporting events management. Greer said having Davis as his Academy doctoral mentor provides him with the opportunity to have an inside look at a career in sports management.

“As my United States Sports Academy mentor, Dr. Dexter Davis gives me an inside look at what it takes to be a leader in sports management,” Greer said.

“From working at the NFL Experience to escorting Jerry Rice, managing game day operations and working the New England Patriots after party, Dr. Davis provided me with a great opportunity at the Super Bowl,” Greer said.

“We joke that Dr. Davis knows everyone in the sports business,” Greer said. “He provides his students with a multitude of opportunities for hands-on experience at the Super Bowl, Cardinals spring training, and golf tournaments, just to name a few.”

While at the NFL Experience, Davis and Greer also experienced the breadth of the Academy’s alumni network, meeting recent Academy doctoral graduate Dr. Alan Ledford and current doctoral student James Mattern, who were also volunteering at the event.

“I took Josh Greer with me and we actually met other Academy students there by chance,” Davis said.

Davis is the sport management coordinator in the University of Tennessee at Martin’s College of Business and Global Affairs. Davis earned his bachelor’s degree in physical education from Houghton University in Houghton, N.Y., in 1982. He earned his master’s degree in physical education from Canisius College in Buffalo, N.Y., in 1997 and his Doctor of Education degree in sports management from the Academy in 2001.

In addition to Greer, Davis also took along nine of his undergraduate students from UT-Martin. Davis, Greer and the other students volunteered at the NFL Fan Experience, assisting guests with various games, NFL Combine-style skills tests and other offerings in the interactive fan zone.

On Super Bowl Sunday in Houston, Texas, Davis managed the movement of former, current and Pro Football Hall of Fame players from spot to spot during a meet and greet session before the game began. The students were each assigned a player, who they then escorted from location to location during the event. This year, the players involved were Jerry Rice, Marcus Allen, Tim Brown, Willie Roaf, Aeneas Williams, Joe Theismann, Derrick Brooks, Emmanuel Sanders, Mark Ingram, Deion Sanders, John Randle and Jonathan Ogden. Greer escorted Pro Football Hall of Fame wide receiver Rice at the event.

Davis said he and the students were able to watch the first half of the game in the stadium, then regrouped to be briefed about their assignments for the Patriots’ post-game party. They were also able to watch the overtime period – in which the Patriots scored the game-winning touchdown – on a big screen with a live stadium feed on site.

Davis has also taken his students to a Major League Baseball spring training volunteer experience in Florida. He said the experiences are an important part of the learning process for his students, and doctoral students like Greer.

Prior to joining the UT-Martin faculty in 2013, Davis served as a visiting professor of sport management at York College of Pennsylvania. He is also a former faculty member at Niagara University at Alfred State College, both located in New York.