United States Sports Academy alumnus Byron Cunningham has been promoted to director of rehabilitation and assistant athletic trainer for the award-winning athletic training program of the Los Angeles Rams of the National Football League (NFL).

Cunningham, who earned his Master of Sports Science degree in sports medicine from the Academy in 2002, spent the previous eight seasons as a physical therapist and assistant athletic trainer for the Rams.

In his new role, Cunningham is responsible for the care, prevention, treatment and rehabilitation of player injuries in coordination with the head athletic trainer. During his tenure with the Rams, Cunningham has overseen several critical player rehabilitation programs, including former wide receiver Brian Quick who suffered a potentially career-ending shoulder injury in 2014 and returned to the field in 2015.

“I’m honored to have this opportunity to continue my work with the Los Angeles Rams,” Cunningham said. “I’ve learned a great deal from my peers and the individual athletes and look forward to being challenged to implement unique rehabilitative practices and treatments.

“Working for the Rams has been an honor and a privilege because I’ve always felt that it takes a special and unique person to work in sports. My biggest enjoyment about my profession is being hands-on with the players on a daily basis.” 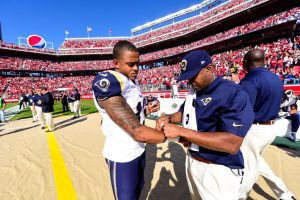 Academy alumnus Byron Cunningham tapes the wrist of a Los Angeles Rams player during a game at San Francisco. Cunningham is director of rehabilitation and assistant athletic trainer for the Rams.

Cunningham earned a bachelor’s degree in physical therapy from Florida A&M University in 1998.

“The Academy prepared me for my career because I had instructors who cared and challenged me on a daily basis, and in sports nothing comes easy because ultimately the end result is about winning,” Cunningham said. “Earning my degree from an institution that focuses only on sports was very exciting because sports are something that I have always participated in, whether as an athlete or a fan.

“It is easy to say that my greatest professional achievement is working with an NFL team because I have one of just 32 jobs, but at the same time it is humbling knowing that working in professional sports is not an easy profession to obtain,” he said.

“I’m thankful every day knowing I can come to work and do a job that I’ve dreamed of doing since my time at the United States Sports Academy.”

The Rams training staff was named the 2015 NFL Athletic Training Staff of the Year by the Professional Football Athletic Trainers Society. Cunningham said the award was important because it is selected by other NFL athletic trainers.

“Being named the 2015 NFL Athletic Training Staff is a tremendous honor, especially when it is voted on by your peers from the other 31 NFL teams,” Cunningham said. “It also shows the trust and the positive reputation we have established with our players and organization.”

Cunningham also has experience working internationally as an assistant athletic trainer with NFL Europe’s Rhein Fire in 2004. He also interned with the Chicago Bears in 2003, Auburn University from 2001-03, and the Indianapolis Colts during the team’s 2002 training camp.