A native of Fredericton in New Brunswick, Canada, Hornibrook had previously served as an assistant coach at Cornell for five seasons and as the team’s interim head coach before the promotion. He earned his Master of Sports Science degree in sports studies from the Academy in 2008 with honors while he was working as men’s soccer coach at the State University of New York (SUNY) Cortland.

“My Academy education was very helpful,” Hornibrook said. “At the time I was working at SUNY Cortland coaching the men’s team.

“I was also teaching in the Physical Education Department and my Academy master’s degree gave me the skillset and knowledge to do the teaching portion of my job and kept me current in several other academic areas.

“The Academy’s online program was a major asset as I would not have been able to achieve what I did without the convenience of a very specific sport related curriculum available to me online.”

Hornibrook, who lives in Lansing, N.Y., is a veteran college soccer coach whose lifetime record as a head coach is 182-115-30.

“The work as head coach of the Cornell women’s soccer team is very challenging and rewarding,” he said. “I am privileged to work with outstanding people who are committed to excellence and strive to achieve at a high level. I enjoy the opportunity to work and compete in the Ivy League as it really does a great job blending high level academics and Division 1 athletics.

“The head coaching role is much different from the assistant role as you are ultimately responsible for all facets of the program and must manage all recruiting and practice and game related issues. We have an interesting blend of people this year, with a lot of new faces mixed with a group of juniors and seniors who have been here and have some experience.  We are getting solid contributions from players in each of our four classes.” 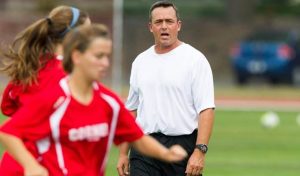 Before being named head coach at Cornell, Hornibrook served as the head coach of men’s soccer at SUNY Cortland for eight seasons.  Hornibrook also has head-coaching experience at Houghton College in Caneadea, New York, where he led the men’s soccer team to NAIA regional titles in 1995 and 1996. In his final season, he was named the Northeast Region Coach of the Year and guided the team to a final national ranking of 24.

He was also a member of the Canadian National Soccer Team staff and director of the Atlantic Regional Training Center from 1987-94. During that time, he coached with World Cup, Olympic and U-17 National teams in international competition. In 1991, Hornibrook was a player/assistant coach for the Nova Scotia Clippers in the Canadian Soccer League. Hornibrook served as head coach of the Winnipeg Fury in 1990 and was a guest coach with FC Auxerre of the French Elite League. He also previously served as North American scout for Middlesbrough FC of the English Premier League. He has also served on the preseason coaching staff of the Rochester Rhinos from 2005-07.

Hornibrook earned a bachelor’s degree in education from the University of New Brunswick, Canada, in 1982. He was a five-year member of the soccer team as a midfielder and was a two-time Atlantic Universities Athletic Association (AUAA) all-star. The team won a national title in 1980 and he was named an Athlete of Distinction in 1982. After graduation, Hornibrook was a member of the North American Soccer League’s (NASL) Toronto Blizzards reserve squad in 1983. He also taught physical education from 1983-86 in Moncton, New Brunswick, winning provincial championships in soccer and wrestling.

“I enjoyed playing a great deal and am an educator at heart, so coaching seemed like the natural direction to pursue, and it has worked out well,” Hornibrook said. “As far as my greatest professional accomplishment, I would say having the opportunity to represent your country is hard to beat. My main goal is to continue to inspire people, regardless of the level to maximize their potential in the sport and compete at the highest level possible.”

The Academy is an independent, non-profit, accredited, special mission sports university created to serve the nation and world with programs in instruction, research and service. The role of the Academy is to prepare men and women for careers in the profession of sports.