DAPHNE, Ala. – United States Army Sergeant First Class Jennifer Palacios is a full-time working mother and a bachelor’s degree student at the United States Sports Academy. She is also the proud owner of four powerlifting records in the state of Florida.

Palacios, who works at United States Central Command at MacDill Air Force Base in Tampa, Fla., is pursuing her Bachelor of Sports Science degree in sports strength and conditioning. She owns four state of Florida powerlifting records in her weight and age class in the squat (260 pounds), bench press (170 pounds), deadlift (360 pounds) and overall total weight (790 pounds).

She said her Academy degree will prepare her to help others in the military live healthier lifestyles and pursue their goals in the sport and fitness world.

“With the knowledge and skill set I will obtain with my degree I will be able to customize individual programs for people from all walks of life,” Palacios said. “I want to give back and continue to serve as I have served in the military for the last 20 years. I want to improve the quality of life for others.

“I have finally been able to combine my passion for sports and fitness and my purpose of helping others into a career by obtaining my degree from the Academy.

“The Academy has prepared me for a career in the exercise and sports science field by providing the education portion needed in order for me to be given a chance,” she said. “The fact that the Academy focuses solely on sports is wonderful. Having a sole focus allows for more attention to detail and more informed professors and students when it comes to sports.”

Palacios said the Academy’s online options and flexible scheduling have allowed her to continue working in every aspect of her life while pursuing her education. 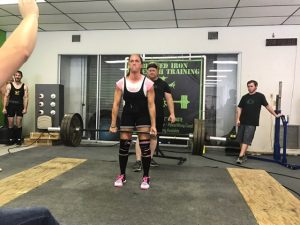 Palacios has not been involved in powerlifting for very long, despite being a dominant force in her weight class. About two years ago, she was dealing with aches and pains from osteoarthritis in her knee. Her trainer at the time suggested she incorporate heavier weights into her training routine to strengthen her knees. Just two years later, she broke two Florida records and set another at her first meet in January in Largo, Fla. In May of this year, she broke her previous records and set another in just her second competition.

“Powerlifting truly encompasses everything I enjoy about sports,” she said. “It is as much a team sport as it is an individual one. The powerlifting community is very supportive of everyone competing so that it creates a ‘team’ environment. For me, powerlifting pushes me beyond what I ever thought I could accomplish physically and even mentally.”

Palacios has been active in athletics for most of her life, starting with tee-ball as a young child, then playing a host of organized sports in high school. Today she stays active with volleyball, softball, powerlifting and obstacle races like the Rugged Maniac series. She has also devoted her adult life to a military career.

“I have spent the last 20 years serving in the U.S. Army and have held many positions,” she said. “The military is the one constant in my life and it is something I don’t regret and would never change. What I like about my current position is that I have the opportunity to help others. Not only do I help in an administrative aspect but also in a fitness and nutrition role as well.

“I believe my greatest accomplishment is a work in progress and is yet to come. I have accomplished many things throughout my life from my military career to my three wonderful children and everything in-between, but in all honesty, I know I have so much more to give in life.”