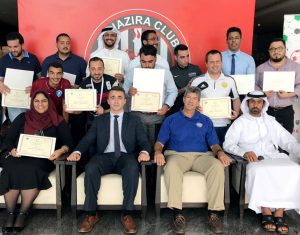 The Academy and UAEFA collaborated to develop the Football Association Academy for Sports Management (FAASM), known as the Football Association Academy (FAA). This effort includes soccer certification programs that offer professional preparation and training designed to meet the needs of coaches, athletes, administrators and operatives at all levels in the UAE club system. The FAA began offering classes in February 2016.

The Academy provides faculty and instruction for the program, which includes subjects such as sports administration, sport marketing, sports media, and facility and event management. Each subject has three levels of instruction through which successful students receive in succession a “C”, “B” and “A” level license. 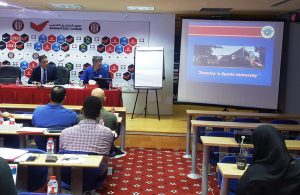 “We are giving these students a good foundation for sport marketing so they can they can put together the pieces of the puzzle that make up a successful sport enterprise,” Shrock said. “They have great facilities, players, coaches and staff. We are here to teach them how to increase visibility, increase spectators and market their programs on social media and the web.

“The Academy is providing these students with a fantastic opportunity to have someone from the outside, with a different perspective, come in and give them new information that they can apply in their region.

“It is always a breath of fresh air to get a different perspective. Our role is to give them good content and show them how to apply it to their specific needs.”

Shrock – a professor of health and physical education and track and field coach at Modesto Junior College in Calif. – this summer was elected chair of the USA Track and Field (USATF) National Associations Committee at the group’s annual meeting in Orlando, Fla. He was also awarded the McGill Legacy Coaching Award, given annually by the USATF Coaching Education Committee.

Shrock has served several leadership roles for USATF over the last four decades and coached internationally for the organization, serving as an assistant coach at the 2012 World Indoor Championships in Istanbul and the PanAm Cross Country Championships in Venezuela in 2016. 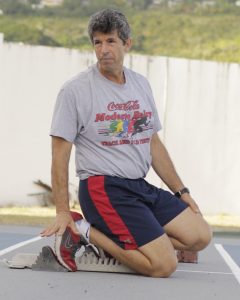 He has more than 40 years of track and field coaching experience, including 20 years as a college coach. He said soccer and track and field often face similar challenges in marketing.

“I enjoy teaching for the Academy overseas because of the great diversity of the students and the wealth of experience and knowledge they bring to the table,” Shrock said. “These students are often experts in their fields, and we are there to give them our information so they can apply it to their reality.”

A resident of Modesto, Calif., Shrock earned a bachelor’s degree in history and a master’s degree in kinesiology from San Jose State University. He earned his Doctor of Education degree in Sports Management from the Academy in 2009.  He was recently named the Academy’s Alumnus of the Year for 2017.

Shrock serves in numerous USA Track & Field leadership roles including president of the nation’s largest association, the Pacific Association; as USATF Coaching Committee chair; and as vice chair on the USATF National Association’s Executive Committee. He has educated more than 1,000 coaches throughout the country and directs track and field schools and clinics. His association work includes oversight of several national championships and hosting Olympic trials. His efforts have included coaching schools for youth, high school, college and elite levels.

Shrock began his college coaching career in 1976 at the College of San Mateo in his home town of San Mateo, Calif., before coaching cross country and assisting with track and field at Stanford and San José State universities. He coached Modesto Junior College to two Northern California Community College Championships and three runner-up finishes in track and field. He has been named a coach of the year 10 times and coached 64 junior college All-Americans.