The United States Sports Academy’s 2018 Alumnus of the Year, Novack has more than 18 years of experience as a sports administrator, managing Olympic and national teams that have won eight Olympic medals, seven world championships and more than 60 World Cup medals. Novack – the USA Rugby Men’s Eagles Sevens program operations manager – will serve as the Team Leader at this year’s Olympic Rugby tournament, which kicks off on 26 July.

A Colorado native, Novack, earned his Master of Sports Science degree in sports management from the Academy in 1997 and participated in a mentorship at Brunel University in London, where he met other students and administrators who helped to spark his interest international sports like rugby.

Novack said his Academy master’s degree and London mentorship played a significant role in his professional career in high performance and sports operations management, as well as his employment at USA Rugby, his second stint at the organization. 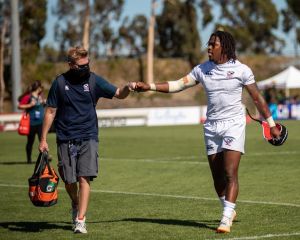 “My Academy degree and mentorship program really set me up for a good career,” Novack said.

“The experience I got, especially during mentorship in London, was invaluable. Getting my master’s degree from the Academy helped me to meet the people I needed to meet, which led to my career.

“I learned about rugby while I was in London… My experience there gave me the opportunity to interview with USA Rugby, which ultimately led to my first job there. My mentorship was a fantastic opportunity.”

Novack worked at USA Rugby from 1999 to 2005 on initiatives related to coaching, youth and high school player development and the Under 19 National Team. Novack then worked in high performance for USA Taekwondo (2005-07) and USA Bobsled (2008-14), as well as with the U.S. Olympic Committee’s modern pentathlon team, where he implemented the 2008 Beijing Olympic Games preparation plan.

He also helped the USA Bobsled and Skeleton team win six medals at the Sochi 2014 Winter Olympic Games in Russia. After the Sochi Games, Novack performed contract work in high performance internationally, then took a job at Tulane University in New Orleans, La., in facilities and events management for intercollegiate athletics.

“Rugby is one of the fastest growing sports in the United States,” he said. “There are roughly 100,000 people playing the sport in the states, and there are many high schools with rugby teams now. There’s been a huge movement of popularity here, and with that, the sport is attracting better athletes.

“Rugby is also getting more exposure on television, with the likes of NBC and ESPN broadcasting matches, and it also earned Olympic recognition. All those things add up to a bright future for rugby in the states.”