DAPHNE, Ala. – United States Sports Academy alumna Jaymie Cox said her master’s degrees and mentorship experience from the Academy helped her to solidify a strong sports education, took her overseas and helped her to secure her job as the head coach of a collegiate volleyball program.

Cox, who earned dual Master of Sports Science degrees in sports coaching and sports management from the Academy, is the women’s volleyball coach and assistant athletic director at Olympic College in Bremerton, Wash. She played softball and volleyball at Lewis & Clark College in Portland, Ore., where she earned her bachelor’s degree in communications. 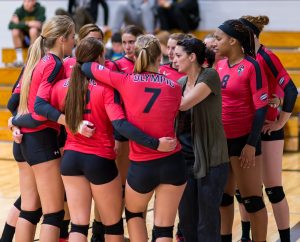 “The Academy allowed me to get my degree on my timeline,” Cox said. “While I was earning the degree I was living in multiple countries and pursing some great opportunities. I didn’t feel like I had to sacrifice one for the other, my job or my school. The self-paced courses were amazing. I fit my work schedule around my homework.”

Cox worked for the Perth Heat, a Major League Baseball international affiliate in Australia, as part of the Academy’s master’s degree mentorship program.

“When the time for the mentorship came around, I decided to go overseas,” Cox said. “A connection through the athletic department of my alma mater led me to a position with the Perth Heat. I worked in the front office for the Heat for the 2012-13 season and the experience was amazing. I got to travel to South Korea for a tournament and I learned a lot about the business side of sport.”

As Olympic College’s assistant athletic director, Cox manages the institution’s recreation program, including its fitness center and all student employees. She also manages the website, all social media and marketing for the department. She also helps coaches and students with everyday activities.

“My degrees from the Academy have helped me solidify my sport foundation,” Cox said. “I’ve worked in multiple arenas in the sports world but I needed a stronger base of knowledge on topics such as sport law, personnel management, and facilities management.  Now I have the confidence to speak up when I see something that could be a liability to our department because I have actually read the law and/or case study.

“I wear a lot of hats, which is probably my favorite part of the job,” Cox said. “Every day is different and each class of student-athletes bring its own challenges. I feel this job fits me well. There’s a degree of helping people and a degree of behind-the-scenes work. At the end of every school year, our athletics staff asks ourselves, ‘What can be done better next year?’ We brainstorm, pick a few key points, and then go make it happen.”

Cox has a lengthy history of involvement in sports. She started playing tee-ball at age 5, then played softball and volleyball in college. She started her coaching career in the high school ranks in Kelso, Wash., then moved to Three Rivers Christian School in Longview, Wash. Cox took a Three Rivers team from a 0-20 record to a state championship berth in just her second season. She also coached volleyball at the club level before taking her mentorship in Australia.

“I’ve always believed that if you stay positive and do good work, opportunities will come your way,” Cox said. “I’m pretty sure that’s how every job I’ve ever had has come about – that and being brave enough to ask for the opportunity. No is just a ‘not at this time’ – every ‘no’ will lead to a ‘yes’ if you stay persistent. I don’t believe I have one major accomplishment to point to and say ‘this was it.’ I always strive to do great work wherever I’m planted. I’ve been a part of cool things in multiple places and fully believe I will continue to do so where I am now.

“My position at Olympic College is my goal right now. It’s why I went to school at the Academy,” Cox said. “I have no idea where I will go from here but I know I have a lot to learn and a great staff to learn from.”