A pioneering sports psychologist in the world of Gaelic athletics, Niamh Fitzpatrick has made a career for herself working with some of Ireland’s biggest names in sport. The head psychologist for the Irish Olympic teams in Athens (2004), Beijing (2008), and London (2012), Fitzpatrick said mental health and wellbeing are equally important to athletes as physical training.

“We must never forget that athletes are people first before they are players,” Fitzpatrick said. “For me, as a psychologist it’s about taking care of the person first and then the player. My wish is always to see emotionally balanced, healthy individuals, who then can participate in sport.

“By its nature, sports participation involves repeated failure, it involves being judged or criticized or commented on. So, it is vital that athletes participating in sport have access to mental health services as well as performance psychology services because some days, those losses, the criticism, the comments can just be too much for any human being.”

Fitzpatrick said her Academy education helped to kick start a fulfilling and rewarding career in the field. She completed her Academy master’s degree mentorship – shadowing an Olympic Sport Psychologist – at West London Institute of Higher Education, which is now part of Brunel University.

“When I wanted to train in the field of Sport Psychology, I wanted to find a program which would allow me to learn from someone currently working in the field. I didn’t want my master’s degree to be a purely academic one,” she said. “The Mentorship program at the Academy enabled me to achieve this and I took some semesters on site at the campus in Daphne, Ala., and I did my mentorship in London, working with an Olympic Sport Psychologist. The combination was an immense learning experience for me and it prepared me wonderfully for what has been a fulfilling and rewarding career. I received a warm welcome from USSA staff and students alike and my time there remains one of my treasured memories in life.”

She has lectured in Applied Psychology and Sport Psychology to students in London, Dublin and Waterford, focusing on the practical application of psychology and is a member of the Psychological Society of Ireland. Fitzpatrick is also an Accredited Sport Psychologist with Sport Ireland Institute. She is also a published author, releasing her first book Tell Me About Truth and Loss in 2020.

“I don’t think I chose a career in psychology; I think it chose me,” Fitzpatrick said. “I saw my first client in 1991 and I can honestly say that this feels like what I was born to do. I love many things about my work: I love that in the mental health space I get to help people navigate the tough times in their life, so that they are not alone. I love that in the performance psychology area I can help people prepare for what might be some of the greatest days of their life. I love that no two days are the same, the variety is immense.

“Sports are important today because they give us opportunity for movement, connection, challenge. They provide a chance to learn key skills such as how to recover from failure or setback or how to manage our emotional world. They enable us to work together in teams, to support one another. They are fields for our dreams, the dreams of conquering our world and mastering a skill, that drive to be the best of the best. We need a space for that, it’s important for our wellbeing, and sport provides an arena for following your dreams.” 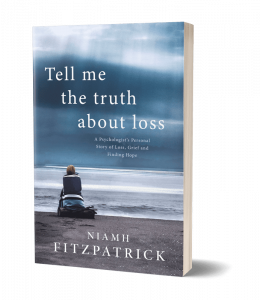 In her private practice, Fitzpatrick works with clients around issues such as anxiety, depression, grief, stress, setbacks, failure, and more. She is well known for bringing clarity and perspective to her psychological sessions, along with great reserves of enthusiasm and humor.

Fitzpatrick’s book, Tell Me the Truth About Loss, shares her difficult journey after the tragic loss of her sister, Capt. Dara Fitzpatrick, who died alongside three crew members in 2017, when their Irish Coast Guard rescue helicopter crashed into the Atlantic Ocean during a rescue mission off the west coast of County Mayo, Ireland.

“My world and that of my family ended that night, our beautiful Dara gone from our lives, suddenly, shockingly, decades too soon,” she said. “For she was only 45 years of age. Her death and all that ensued was traumatic and devastating, and as a sister I found grief to be nothing like I had imagined it to be as a psychologist. To help myself in the face of such devastating loss, I attended a psychologist who helped me to learn to accept and live with Dara’s loss and other losses which arose in my own life as a result of her death. My profession was there for me in my time of need and I will be forever grateful.

“I wrote my book Tell me the Truth About Loss because I knew that if I found grief to be bewildering, confusing, frightening, perhaps others would too, and if I could help someone else who grieves by sharing some of what I have learned on my own journey as I grieve, then it can only be a good thing. Hope is so important in life, it’s vital when we’re grieving and I’m told that my book brings solace, comfort and hope to grievers. To me, that is psychology in action in the best possible way.”