DAPHNE, Ala. – United States Sports Academy alumnus and Washington State University head football coach Mike Leach recently visited the sports university’s campus in Daphne, Ala., where he first learned the skills that he says “ushered me into coaching.”

Leach met with Academy President and CEO Dr. T.J. Rosandich and toured the American Sport Art Museum & Archives during his visit with his family.

After graduating from Brigham Young University with a bachelor’s degree in American studies and earning his Juris Doctor degree from Pepperdine University School of Law – where he originally planned to be an attorney – Leach decided to take a different career path as a football coach.  He earned his Master of Sports Science degree in sports coaching from the Academy in 1988. Leach, a native of Cody, Wyo., is the Academy Alumni President and a past winner of the Academy’s Alumnus of the Year Award. 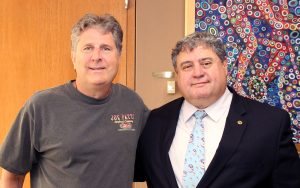 “I had graduated from law school, but I was really interested in sports and coaching,” Leach said.  “The Academy was a really efficient degree. You can still have a job while taking all these courses that elevate your knowledge base. I have three degrees and of the ones I have, my Academy degree was the most efficient program as far as learning something, then immediately being able to apply it to what I was doing.

“The Academy really ushered me into coaching and I’ve been doing it ever since. The education prepared me very well as I was able to get education and experience in coaching simultaneously. Ultimately the skills I learned at the Academy helped me in my coaching career. I obviously didn’t go back to practice law and I’m still coaching today.

“I remember the faculty members at the Academy were very sharp. I developed a real closeness with people there. The faculty gave you a lot of one on one time and the interaction was really good.

“I have a lot of respect and admiration for the Academy because I had a great experience. Everything I learned at the Academy I still use all of the time,” he said.

“Getting my degree from the United States Sports Academy has been a huge part of my success.”

Leach has compiled a 113-77 overall record as a head coach at Texas Tech University (2000-09) and Washington State (2012-17). He was named the Pac-12 Conference Coach of the Year in 2015 and the Big 12 Conference Coach of the Year in 2008. Leach also earned the George Munger Award and the Woody Hayes Trophy, awards given to the top collegiate football coach, in 2008.

Leach began his career as an assistant coach at California Polytechnic State University and worked as an assistant at universities including Oklahoma, Kentucky, Valdosta State, and Iowa Wesleyan.

He eventually landed at the University of Kentucky, where he served as offensive coordinator under head coach Hal Mumme. At Kentucky, Mumme and Leach developed the “Air Raid Offense,” which Leach later utilized as head coach at Texas Tech. Under his leadership, the Red Raiders had an 11-win season in 2008 and nine-win seasons in 2002, 2005 and 2005. The team also led the NCAA in passing yardage four years in a row and his teams produced most of the school’s all-time statistical leaders in passing and receiving.

Washington State highlights include Leach leading his 2013 team to the school’s first bowl bid in 10 seasons. The 2013 Cougars were led by quarterback Connor Halliday, who set school and conference records for passing. The team also led the nation in passing offense and total offense. In 2015, the Cougars finished 9-4 and won the Sun Bowl with a 20-14 victory against the Miami Hurricanes.

“I like coaching because it changes and evolves all the time,” Leach said. “Coaching is a profession where you have to constantly incline and achieve. You have to prioritize what’s important and work together well with the people around you. It comes together in a fashion that, no matter who you are, you learn something new every day.”