Athlete of the Year Voting Ballot

What are your picks for male and female Athlete of the Year?

2020 Athlete of the Year Ballot

Novak Djokovic, tennis, Serbia
Serbia’s Novak Djokovic was dominant on the tennis court in 2020, taking home victories at the ATP Cup and Australian Open, and winning tournaments in Dubai, Cincinnati and Rome. Djokovic’s title in Madrid was his record 36h ATP Tour Masters title. He also reached the finals in the French Open at Roland Garros.

Caeleb Dressel, swimming, United States
American swimmer Caeleb Dressel won International Swimming League MVP honors and helped the Cali Condors win the league title after his record breaking performance in Budapest in November. Dressel raced to short-course world records in the 100-meter individual medley, 100m butterfly and 50m freestyle and a short-course American record in the 100m freestyle. He also became the first swimmer in history to finish under 50 seconds in the 100m individual medley (49.28) and under 48 seconds (47.78) in the 100m butterfly.

Mondo Duplantis, pole vault, Sweden
Swedish pole vaulter Mondo Duplantis was named the World Athlete of the Year by World Athletics after setting two world records and finishing the year undefeated in 16 competitions. Duplantis broke the world record in the pole vault twice, topping 6.17 meters and 6.18 meters on consecutive weekends in February. He also recorded the highest outdoor pole vault of all time at 6.15 meters later in the season.

Mo Farah, athletics, Great Britain
Great Britain’s Mo Farah set the men’s world one-hour record at the Diamond League event in Brussels in September with a distance of 21,330 meters (69,980 feet). He broke the 2007 mark of 21,285 meters set by Haile Gebrselassie.

Patrick Mahomes, football, United States
Kansas City Chiefs quarterback Patrick Mahomes earned the NFL’s Super Bowl MVP honors after passing for 286 yards and two touchdowns with an additional rushing touchdowns as the Chiefs defeated the San Francisco 49ers 31-20 in Miami in February. Mahomes was named one of the Sports Illustrated Sportspeople of the Year for 2020.

Tadej Pogačar, cycling, Slovenia
Slovenia’s Tadej Pogačar was crowned the 2020 Tour de France champion in September. Pogačar, who turned 22 the day after the final stage, became the youngest winner of the race since 1904 and the first Slovenian champion. He also won the King of the Mountains and Best Young Rider classifications. 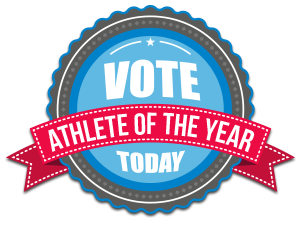 We will be announcing the winners shortly.
Please check back next month for another chance to vote.

Do you have suggestions for next month’s ballot?
Submit your suggestions using this form.

Jamie Anderson, snowboarding, United States
American snowboarder Jamie Anderson became the most-medaled female competitor in the history of the X Games after winning the women’s slopestyle snowboarding championship – the eighth of her career – at the Burton U.S. Open in Colorado in February. Anderson had a record year after also winning the slopestyle title at the X Games, U.S. Grand Prix, and Dew Tour earlier in the season.

Letesenbet Gidey, athletics, Ethiopia
Ethiopia’s Letesenbet Gidey broke a world record in the 5,000-meters with a time of 14:06.62 at a meet in Valencia, Spain, in October. Gidey’s time took more than four seconds off the previous record held by her compatriot Tirunesh Dibaba since 2008.

Sifan Hassan, athletics, the Netherlands
Sifan Hassan of the Netherlands set the women’s world one-hour record in Brussels in September with a distance of 18,930 meters, breaking the previous world record set by Ethiopia’s Dire Tune in 2008. Later in the season, Hassan broke the European 10,000-meter record with a time of 29:36.67 at the FBK After Summer Competition in the Netherlands and in October. Hassan’s time made her the fourth fastest woman in history for the distance.

Sabrina Ionescu, basketball, United States
American basketball player Sabrina Ionescu became the first NCAA basketball player – male or female – to record 2,000 points, 1,000 rebounds, and 1,000 assists in a career after the Ducks defeated Stanford 74-66 in February. Ionescu scored 21 points, 12 rebounds, and 12 assists in the win. Later in the year, Ionescu was the first overall pick in the 2020 WNBA Draft after being selected by the New York Liberty.

Sofia Kenin, tennis, United States
American tennis player Sofia Kenin was named the WTA Player of the Year after winning her first Grand Slam title at the Australian Open in January and reaching the final at the French Open at Roland Garros in October. She was the only women’s player to reach the finals in two of the three Grand Slam tournaments played this season. Kenin finished with a 16-2 record at the majors in 2020.

Cat Osterman, softball, United States
American softball player Cat Osterman won the inaugural Athletes Unlimited league title with the most individual points of any player after five weeks of competition with 2,408. Osterman pitched six complete games and finished with an overall win-loss record of 13-1 in the new softball event.

Yulimar Rojas, athletics, Venezuela
Venezuelan athlete Yulimar Rojas was named the Athlete of the Year by World Athletics after breaking several records during the abbreviated, Covid-19 impacted season. Rojas broke the South American indoor triple jump record with a distance of 15.03 meters and broke the world indoor record with a distance of 15.43 meters later in the season. She also recorded the farthest outdoor distance of the season with a 14.71-meter leap in Diamond League competition.

Mikaela Shiffrin, alpine skiing, United States
American alpine skier Mikaela Shiffrin won gold in the women’s giant slalom event in Courchevel, France, in December – her first victory in the discipline after 323 days filled with injury, Covid-19 cancellations, and a tragic death in her family. It was Shiffrin’s 67th career World Cup victory, tying her for third place with Marcel Hirscher among all-time skiers.