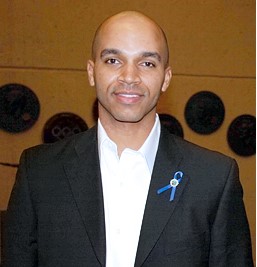 American painter Kadir Nelson is recognized around the world as an artist with a passion for history and a special genius for telling history’s edifying tales through his works.

The United States Sports Academy’s 2009 Sport Artist of the Year, Nelson has been hard at work during the COVID-19 pandemic, trying to capture on canvas the strength of the human spirit. His new painting “After the Storm” is a triumphant celebration of humanity, determination, faith, and solidarity depicting a diverse group of people standing together in the face of the pandemic. The figures in the painting are seen gazing past heavy storm clouds as they collectively heal, gather strength, and move toward the promise of a brighter and stronger future.

“I think one of the things that we’re probably missing, a lot of people are missing now, is human touch, because we have to stay so far away from one another,” Nelson told CBS Sunday Morning.  “So, I wanted to make sure to emphasize that that is part of being a human being, is human touch.”

The artist plans to donate a significant portion of the proceeds from the sale of the original piece and any prints that follow to COVID-19 relief efforts. More information about “After the Storm” can be found here. 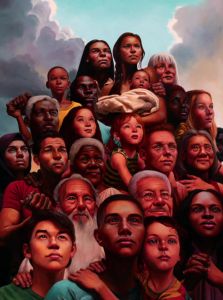 “After the Storm” by Kadir Nelson

The Academy’s American Sport Art Museum and Archives (ASAMA) collection is home to selected pieces from Nelson’s best-selling book, “We Are the Ship: The Story of Negro League Baseball,” one of the most astoundingly creative sports books ever. The book’s story focuses on racial discrimination and international sportsmanship. More specifically, the story features players who overcame segregation, hatred, terrible conditions, and low pay to do the one thing they loved to do more than anything else in the world: play ball. The book received its name in honor of the founder of the Negro National League, Rube Foster, who once said, “We are the ship; all else the sea.”

The artist was also the winner of both the coveted 2020 Caldecott Medal and the Coretta Scott King Book Award for his illustrations in the book “The Undefeated.”

Nelson is known for his depictions of historical subjects, paying tribute to young athletes of the past. An award-winning American artist, his works have been exhibited in major national and international publications, institutions, art galleries, and museums.