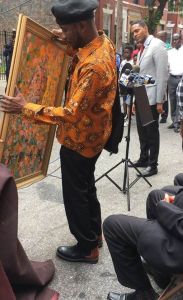 United States Sports Academy 2010 Sport Artist of the Year Tafa was recently commissioned to pay tribute to a hero who gave his life rescuing people from a fire in the Bronx.

Tafa, a native of Ghana, created a portrait memorializing New York National Guard Private Emmanuel Mensah, 28, who died in December of 2017 while attempting to rescue people stranded inside of a burning apartment building. The late soldier was one of 13 people who were killed in the fire.

The artist presented the portrait to Mensah’s family during a street naming ceremony in his honor. The street, 2363 Prospects Avenue in Bronx in New York City, was renamed Private First Class Emmanuel Mensah Way after the late soldier. New York Gov. Andrew Cuomo approved the award of the New York State Medal for Valor to Mensah. Mensah was also posthumously awarded of The Soldier’s Medal, the National Guard’s highest award for heroism outside of combat.

Tafa is the first native of Africa to be honored by the American Sport Art Museum & Archives (ASAMA) located on the Academy campus in Daphne, Ala. He now calls Harlem, New York home. 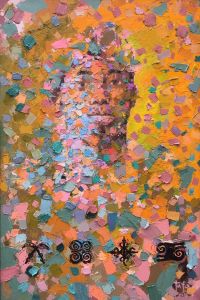 The artist’s style has been described as blending musical rhythms, textured strokes, lush hues and spirituality. He says his paintings are “my drum song, my dance of the soul. I am like the divine drummer.” He obtained a Bachelor of Arts Degree from the College of Art, Kwame Nkrumah University of Science and Technology in Ghana.

Tafa gained international recognition as a painter with his painting “Turning Swords into Swatches.” It won first place in the Swiss Painting Competition in 1989.

He has been exhibited in a number of galleries and institutions in the United States, Japan, Europe and Africa. His works are part of numerous private and public collections in the Superior Court in Washington D.C., Fort Frederik Museum, The Smithsonian, Sparrow Hospital in Michigan, Ghana’s national museum, Carver Federal Bank and former New York mayor David Dinkins.