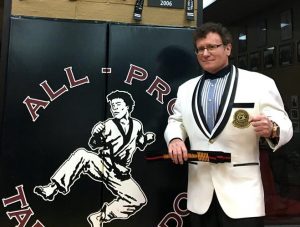 United States Sports Academy Board of Visitors Chairman Dr. Bob Goldman recently earned the rank of 7th Dan Black Belt from the All-Pro Tae Kwon Do Hall of Fame in Los Gatos, Calif. He was also featured in a Psychology Today column on how to achieve success.

DAPHNE, Ala. – United States Sports Academy Board of Visitors Chairman Dr. Robert Goldman was recently featured prominently in Psychology Today as a role model on how to attaining success and achievement, even as he was receiving a higher rank in the world of martial arts.

Goldman, a resident of Chicago, Ill., is the co-founder and current chairman of the American Academy of Anti-Aging Medicine. Goldman was the Academy’s 2012 Dwight D. Eisenhower Fitness Award winner and is founder of the International Sports Hall of Fame. He is the world chairman of the International Medical Commission and President Emeritus of the National Academy of Sports Medicine.

Goldman was featured in a Psychology Today column, “Dr. Bob: The Grandmaster of Success,” written by Dr. Neil Farber, M.D.  He was also awarded the rank of 7th Dan Black Belt and given the Masters Award at the All-Pro Tae Kwon Do Hall of Fame event in Los Gatos, Calif.

In the article, Farber compares Goldman to the “Most Interesting Man in the World” from the well-known Dos Equis beer television commercials, calling Goldman “…one of the most successful, accomplished, influential and altruistic people that I not only have the privilege of knowing, but one of the most awe-inspiring humans I have ever read about.”

“His motivation is service,” Farber wrote of Goldman. “While he certainly reaps benefits of his achievements, being the monthly recipient of one award or another, his true motivation is that he has a passion for helping others in a very altruistic, unassuming and unselfish way.

“This is why he initially became a doctor and why he continues to serve the worldwide community in that capacity. In fact, Dr. Bob donates the majority of his time in charitable pursuits around the world, including fitness and medical education.”

The Psychology Today column can be read in its entirety here: https://www.psychologytoday.com/blog/the-blame-game/201711/dr-bob