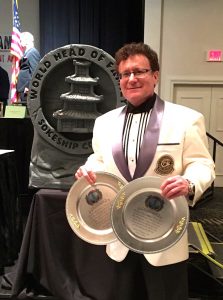 DAPHNE, Ala. – United States Sports Academy Board of Visitors Chairman Dr. Robert Goldman recently added a host of new accolades to his already impressive list of achievements in the world of martial arts and health and fitness.

Goldman, a resident of Chicago, Ill., is the co-founder and current chairman of the American Academy of Anti-Aging Medicine. Goldman was the Academy’s 2012 Dwight D. Eisenhower Fitness Award winner and is founder of the International Sports Hall of Fame. He is the world chairman of the International Medical Commission and President Emeritus of the National Academy of Sports Medicine.

He was recently awarded an honorary membership in the World Head of Family Sokeship Council, the foremost collective group of accredited and internationally recognized martial arts masters and grandmasters in the world.  The council serves the martial arts community by providing in-depth investigations into the validity, knowledge and skill of its membership. It is the governing board which maintains integrity for the martial arts.