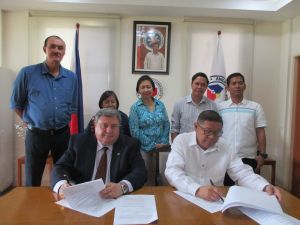 With members of the Philippine Sports Commission (PSC) looking on, PSC Chairman William Ramirez and Dr. T.J. Rosandich sign a Memorandum of Understanding concerning the establishment of sports education programs in sports coaching, management and physical education/coaching to be taught by the Academy in the Philippines.

“Since its founding in 1972, the Academy has always had an international orientation,” said Rosandich. “This view is reflected in its mission statement and in the fact that the Academy has delivered sport education programs all around the globe. It is also an acknowledgement that sports is truly a universal language.”

In the Republic of the Philippines, Rosandich signed a memorandum of understanding (MOU) with the Philippine Sports Council (PSC) to deliver three certification programs in that country beginning late this summer. The President also participated in a working group from the University of the Philippines to discuss ways to establish an educational framework for the program. 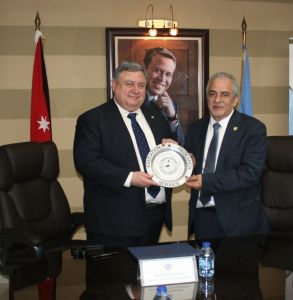 In India, the President signed as a witness to an MOU for two sport management programs between the Administrative Staff College of India and the Sports Asia Foundation who serve as the Academy’s representative on the sub-continent. While the programs contemplated by this arrangement will be taught in Hyderabad, the Academy will also offer online post-secondary, non-degree sport education programs to students in that country.

The President also traveled to Jordan, where he signed a Protocol of Cooperation with the Al-Ahliyya Amman University in Amman. Rosandich also met with the General Secretary of the Jordanian Olympic Committee, Nasser Ayman Majali, who provided a briefing on the group’s activities at the Jordanian Olympic Development Center.

The Academy President visited Dubai and met with the Academy’s associates at the United Arab Emirates Football Association Academy. The Academy has played a role in the development of the Football Club Operators License Program there.

In Bahrain, Rosandich met with Shaikh Mohammed Daij Al-Khalifa, President of the Bahrain Paralympic Association, to discuss the Academy’s disabled sports programs in that country. The institution recently concluded its first series of classes with 223 Bahraini students completing the program, which trains university students, physical education teachers and coaches there to meet the needs of athletes with adaptive needs. The program has already shown signs of success there, as several students have begun working with Paralympic athletes in that country. 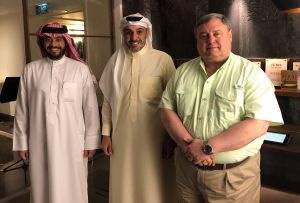 Finally, in Nepal the President met with members of the Nepal Olympic committee, National Sports Council, Sports Sciences Department of Tribhuvan University, and the Nepal Army about potential programs in that country in the future.

Since its founding nearly a half-century ago, the United States Sports Academy has leveraged its role and resources as a special mission sports university to make a global impact through quality sport instruction, research and service programs in 65 countries around the world. These contributions have varied in scope from the full-charge conduct of a nation’s entire national sport effort to individual coaching clinics, seminars, and symposia.