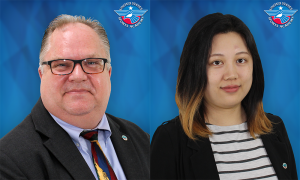 DAPHNE, Ala. – A United States Sports Academy faculty member and doctoral student recently teamed up on an article published in the Psychology and Behavioral Science International Journal that investigates the psychology of immigration as it relates to the world of sports.

Academy Chair of Recreation Management Dr. Rodney Blackman and doctoral teaching assistant Wanyi Tang wrote the article “Unpackaging the Psychology of Immigration” for the journal, which is published by Juniper Publishers in Simi Valley, Calif. The piece examines the intersection between immigration and sports, recreation, leisure services and tourism. Both Blackman and Tang have significant personal experience with international travel and immigration.

Blackman has worked in a range of professional settings, including academia, where he has taught at the university level since 1997. He has lived and worked in a number of different environments, including internationally, in Japan, Germany, and Russia. Blackman has also spent several summers in Ireland, where he has led study abroad troupes and conducted research and development with the Gaelic Athletic Association (GAA).

Tang, a native of China, holds a bachelor’s degree from the Beijing Language and Culture University, where she also participated in the university’s exchange study program at Kristianland University in Sweden, and a master’s degree in translation and interpreting (Chinese-English) from the University of Westminster. Prior to joining the Academy, Tang was a teaching assistant and lecturer at the School of Foreign Languages at the Central University of Finance and Economics in Beijing, where she taught undergraduate courses on intensive reading, listening and speaking and cross-cultural communication. She was previously a liaison officer for the Aircraft Owners and Pilots Association of China.

The article looks at challenges and opportunities posed by immigration, including that immigration can lead to social problems in the destination countries; migrant workers are often employed in sports, recreation, leisure services, travel, tourism, and hospitality sectors; and immigration contributes to the development of new cultural products, enriching the cosmopolitan environment of destination countries.

The article particularly looks at the vulnerability of migrant workers.   For instance, it touches on topics including the number of migrant worker deaths that have occurred during construction of facilities for international sporting events. According to a report from the International Trades Union Confederation approximately 1,200 workers have died during construction of venues for the 2022 FIFA World Cup in Qatar alone since 2010. Other reports have shown that at least 17 construction workers died and many others suffered injury and harsh working conditions while building stadiums for the upcoming 2018 FIFA World Cup in Russia.

These reports have been met with calls from various human rights groups for tighter restrictions on working conditions and hours, which Blackman said need to be enforced globally.

“The way we treat migrant workers has to change on a global level,” Blackman said. “We have to do a better job providing for them in basic ways. They have walked away from their usual lives, from whatever comfort they used to have, so we have to be mindful of that.

“Our article makes mention of some of the travesties that have happened in the construction of the sports stadiums in different places around the world. This is something that leaders in the Olympics and FIFA have said, ‘yes this needs to be fixed.’ Ultimately what it comes down to is, there is an abuse of a power differential. Migrant workers come in from other countries to work on these stadiums and they are disadvantaged right away because they aren’t from there. Then, people in power further disadvantage them by abusing them in a variety of ways.

“There also has to be serious consequences and accountability for those who break the rules in how they treat people. If people die at your construction site, FIFA or whoever should take action against you. Maybe don’t allow these countries to host these big events anymore, so they can’t profit off the backs of these people. There needs to be a severe punishment, just like death is severe.”

Blackman said sports can and should be used as a galvanizing, solution-producing field that can impact the world culturally, economically and morally.

“Sports transcend culture, and sports transcend so much of what people do every day,” Blackman said. “We have to be willing to think differently about how we treat people in the sports world and everywhere else. At the Academy, we are going to make sure that our students understand how to work in the sports field in an ethical, humane way.”

Tang agreed that the exploitation of immigrant workers needs to be addressed at the international level by the world’s sport governmental bodies. She said positive progress has been made in that arena and that sport can be used as a force for change in the world.

“On a more positive note, sports immigration and tourism has been on the rise and could have an impact on future immigration practices,” she said.

“Sports have always been a mirror of society. While more research is needed, it is reasonable to think the interdisciplinary research on immigration through the lens of sports will provide insights into the workings of immigration. For example, some studies have found that community-based sports programs can help immigrants adapt and integrate themselves to the new environments.”

The article can be read at  https://juniperpublishers.com/pbsij/pdf/PBSIJ.MS.ID.555751.pdf.