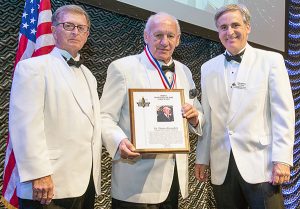 Dr. Thomas P. Rosandich, Founding President of the United States Sports Academy and a long-time leader in sport and sport education around the globe, was inducted into the Mobile (Ala.) Sports Hall of Fame (MSHOF) at the 2017 Induction Banquet at on Thursday, 6 April 2017, at Mobile’s Battle House Hotel.

Founded in 1988, the Mobile Sports Hall of Fame honors the city of Mobile’s many heroes and influential figures in the world of sports. The Mobile area boasts a sports legacy that includes five National Baseball Hall of Fame inductees, National Football League and NCAA championship athletes, All-Americans, Olympians, record setters and legendary coaches and athletic leaders. 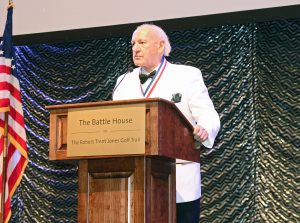 The latest honor comes just months after Rosandich was awarded an Honorary Doctorate by the Academy for his long-time leadership. The Academy’s Board of Trustees also honored Rosandich by naming the “Thomas P. Rosandich Gallery” for him, recognizing his creation of the American Sport Art Museum and Archives (ASAMA), which has provided cultural enrichment to thousands of people. Rosandich also recently was named to the International Sports Hall of Fame (ISHOF), a non-profit foundation established by internationally known fitness expert Dr. Robert M. Goldman “to honor the world’s greatest athlete legends in all sports.”