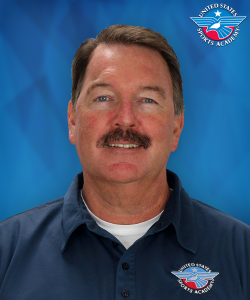 DAPHNE, Ala. – The United States Sports Academy mourns the loss of Dr. Robert A. “Bob” Stinchcomb, an Academy alumnus and non-resident faculty member who passed away on April 14, 2018, at age 59.

Stinchcomb earned his Doctor of Education degree in sports management with a sports leadership specialization from the Academy in 2014 and was chair of Sport Management at Shorter University in Rome, Ga., simultaneously serving on the Academy’s non-resident faculty, a group of highly qualified faculty credentialed to teach in the institution’s degree programs.

Stinchcomb had more than 30 years of college and high school coaching and administration experience.

He has spoken nationally and written numerous articles on topics in athletic administration including Title IX, financial sustainability of athletic programing, sportsmanship and drug testing.  He also was a consultant to school systems on issues related to athletic programming.