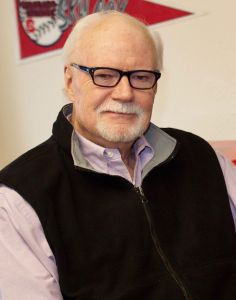 The Academy is mourning the loss of longtime United States Olympic Committee (USOC) communications leader, Academy honoree and friend Mike Moran, who passed away from complications related to pneumonia on 7 July 2020.

Born in Omaha, Neb., in 1942, Moran served the USOC as its chief communications officer and principal spokesman from 1978-2003 and during the Olympic games starting in Lake Placid in 1980 through Salt Lake City in 2002.

A friend of the Academy, Moran was instrumental in working with the institution to organize the U.S. Olympic Sport Art Competition, which the Academy hosted for four consecutive summer Olympic cycles between 2000 and 2012. He earned the Academy’s 2006 Distinguished Service Award for his lifetime of dedication to the Olympic movement in the United States. Academy founder and long-time President of the Academy, Dr. Thomas P. Rosandich, came to know Moran well during his tenure as a member of the USOC in the 1996 Olympic quadrennial. He noted, “I’ve always had the greatest respect for Mike as a consummate professional and as a master of the art of public relations. He left an indelible mark on the USOC and the sport professional as a whole.”

The Nebraska native joined the USOC on February 9, 1979, and he handled the difficult role of directing the USOC’s public relations and media efforts through controversy such as the U.S. led boycott of the 1980 Summer Olympics in Moscow and triumphs such as the “miracle on ice” hockey game in the 1980 Winter Olympics at Lake Placid.

The USOC honored Moran with its highest award, the General Douglas MacArthur Award, in 2002. Moran coordinated the USOC’s media relations through 13 Olympic Games, two Olympic boycotts and numerous controversies and crises related to the world’s most visible sporting event. Moran occupied the podium for more than 1,500 press conferences, Olympic dinners and sponsor banquets.

Between 1963 and 1966, Moran was a sports reporter and photographer at KMTV, Omaha’s NBC affiliate, where he worked with veteran NBC Nightly News icon Tom Brokaw.

Moran was a native of Omaha; he graduated in 1960 from the city’s Westside High School and in 1966 from the University of Nebraska at Omaha, where he played college basketball.