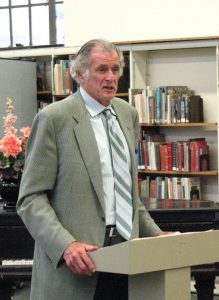 DAPHNE, Ala. – The United States Sports Academy is mourning the loss of Frank Deford, who spent five decades as one of the top writers for Sports Illustrated, as well as nearly four decades as a sports commentator on the National Public Radio (NPR) program, “Morning Edition.”

Deford passed away at age 78 on 30 May 2017 at his home in Key West, Fla. He was the 1985 recipient of the Academy’s Ronald Reagan Media Award. The award is named in honor of the 40th President of the United States and is annually presented to an individual for outstanding contributions to sport through broadcasting, print, photography or acting. Winners exhibit imagination, excitement and genius in kindling a keen public interest and appreciation for the role of sport in modern society.

Deford wrote for Sports Illustrated from 1962 until his death. He was also a correspondent on Real Sports with Bryant Gumbel on HBO and was an accomplished novelist who wrote 18 books. He was a member of the National Sportscasters and Sportswriters Association Hall of Fame and a six-time National Sportswriter of the Year.

In 2012, Deford won the Red Smith Award, presented by the Associated Press Sports Editors to individuals who make outstanding contributions to sports journalism. He was also the first sports journalist ever to receive the National Press Foundation’s W.M. Kiplinger Award for Distinguished Contributions to Journalism. Deford earned the National Humanities Medal, presented by then President Barack Obama, at the White House in 2013.

Deford was also an advocate for cystic fibrosis education, serving as the chairman of the Cystic Fibrosis Foundation from 1982 until 1999.

The Ronald Reagan Media Award is part of the United States Sports Academy’s Awards of Sport, which each year serve as “A Tribute to the Artist and the Athlete.” The Academy presents the awards to pay tribute to those who have made significant contributions to sport, in categories as diverse as the artist and the athlete in several different arenas of sport. The awards honor exemplary achievement in coaching, all-around athletic performance, courage, humanitarian activity, fitness, and media, among others. The Academy’s American Sport Art Museum and Archives (ASAMA) annually recognizes these men and women through its Sport Artist of the Year, Honorary Doctorates, Medallion Series, Distinguished Service Awards, Outstanding Athletes, and Alumni of the Year awards.

Founded in 1984, ASAMA is dedicated to the preservation of sports art, history, and literature. The ASAMA collection is composed of more than 1,700 works of sport art across a variety of media, including paintings, sculptures, assemblages, prints and photographs. The museum is open free to the public from 9 a.m. to 5 p.m. weekdays. For more information, go to www.asama.org.