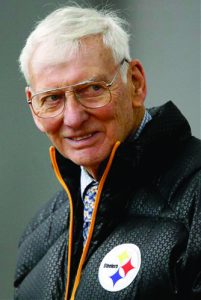 DAPHNE, Ala. – The United States Sports Academy is mourning the loss of former Pittsburgh Steelers President Dan Rooney, a Pro Football Hall of Famer who followed his father into the family business and paved the way for minority coaches in the NFL.

Rooney was the winner of the Academy’s 2009 Theodore Roosevelt Meritorious Achievement Award, which is presented to an individual involved in amateur or professional sport, past or present, who has excelled as a contributor to both sport and society over at least a decade.  Rooney passed away on 13 April 2017.

Rooney grew up around the Steelers as his father, team founder Art Rooney, developed the franchise. Under Dan Rooney’s leadership, the Steelers won six Super Bowls and remained a model NFL franchise. One of his most significant contributions to the league was the “Rooney Rule,” enacted in 2003, which requires all teams to interview at least one minority head coaching candidate for openings. Steelers head coach Mike Tomlin became the second African-American head coach to win a Super Bowl when the Steelers beat the Cardinals in January 2009.

Another chapter was added to Rooney’s legacy in July 2009 when then-President Barack Obama named him the U.S. Ambassador to Ireland.  He was one of the founders of the American Ireland Funds, which is dedicated to building bridges of peace, culture and charity in Ireland and Northern Ireland. He also funded the annual Rooney Prize for Irish Literature for Irish writers under the age of 40.

The United States Sports Academy is an independent, non-profit, accredited, special mission sports university created to serve the nation and the world with programs in instruction, research and service. The role of the Academy is to prepare men and women for careers in the profession of sports. For more information about the Academy, call (251) 626-3303 or visit www.ussa.edu.