United States Sports Academy President and CEO Dr. T.J. Rosandich bolstered the institution’s reach in the Middle East during a recent visit to the Kingdom of Bahrain.

In Bahrain, His Highness Shaikh Khalid bin Hamad Al-Khalifa, Chairman of the General Sports Authority (GSA) of the Kingdom of Bahrain, met with Rosandich to discuss sport development in the island nation in the Middle East. Earlier in 2021, Rosandich was appointed by royal decree to the Board of Directors of the GSA – a group charged with furthering the development of the Kingdom’s national sport effort. 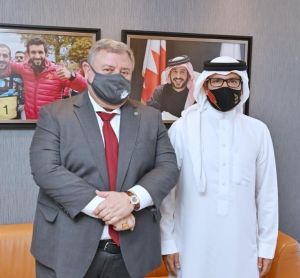 The Academy’s involvement in Bahrain goes back more than 40 years to the beginnings of the Academy’s international instruction, research and outreach programs.   In 1977, the Academy worked with the Bahrain General Organization for Youth and Sports to develop a physical fitness test used to gauge the fitness of every school-aged child in that country, providing the first profile of youth fitness in Bahrain. A descendant of that test is still used today. For three years after, the Academy had full charge conduct of Bahrain’s national sports effort including sports medicine and human performance research laboratory.  Since then, the Academy has conducted numerous programs in Bahrain focusing on physical education in schools, fitness, recreation, youth sports, the Bahrain National Olympic Committee, and fitness programs for police officers, among others.

Since its founding a half-century ago, the Academy has leveraged its role and resources as a special mission sports university to make a global impact through quality sport instruction, research and service programs in 67 countries around the world. These contributions have varied in scope from the full-charge conduct of a nation’s entire national sport effort to individual coaching clinics, seminars, and symposia.  For more about the Academy’s international programs, go to https://ussa.edu/international/.