The Philippines Sports Commission (PSC) is preparing to receive the first of the United States Sports Academy’s faculty being sent to teach the first module of its International Certification in Sports Management (ICSM) program in Pasig City starting 19 August.

The Philippines Sports Commission (PSC) signed a Protocol for Cooperation with the Academy in 2017 that started the planning process for the sport education programs to be taught by the Academy here. This event also marks the return of the institution’s international programs in the country since the Academy first taught certification programs here in the early 1980s.

“I was among the Academy faculty tapped to teach our international certification programs in sports management and sports coaching in the island nation in the early 1980s, so to return is particularly meaningful me,” said Academy President and CEO Dr. T.J. Rosandich. “The Academy is looking forward to playing a role in the enhancing of the national sport effort in the Philippines through our programs in education, research and service. Having taught sports education programs to more than 65 countries, this partnership with the Philippines is a continuation of our mission.”

“We have a great respect for the United States Sports Academy because of the work it did with our country in the past,” PSC Chair William “Butch” Ramirez said. “We are looking forward to restarting the relationship we had for so many years.” 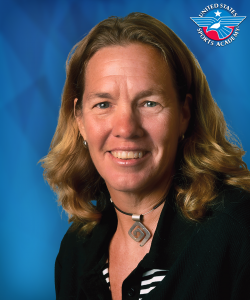 The first Academy instructor who will teach Sports Administration is both an alumna and member of the faculty. Dr. Bonnie Tiell was the Academy’s 2014 Alumna of the Year, having earned her Doctor of Education degree in sport management from the institution. Tiell works with members of the World Olympians Association, which has supervised educational programs at the Olympic Games in Athens, Greece; Beijing, China; London, England; and Rio de Janeiro, Brazil. She has presented research, taught, or collaborated on sports projects throughout five continents and has extensive publishing experience.

Tiell is also a recipient of the Region 4 Excellence in Teaching Award through the Accreditation Council of Business Schools and Programs, is also a member of the Tiffin University Athletic Hall of Fame and recipient of the 2013 Great Lakes Intercollegiate Athletics Conference Donahue Service Award.

The ICSM program consists of six modules each of which covers different aspects of sport administration. Future courses on a wide range of sport management subjects will be taught to support the development of sport at the national and interscholastic levels in the Philippines, helping to educate the coaches and managers responsible for the long-term growth of success of sport in the country.

Since its founding nearly a half-century ago, the Academy has leveraged its role and resources as a special mission sports university to make a global impact through quality sport instruction, research and service programs in 65 countries around the world. These contributions have varied in scope from the full-charge conduct of a nation’s entire national sport effort to individual coaching clinics, seminars, and symposia. For more about the Academy’s international programs, go to https://ussa.edu/international/.