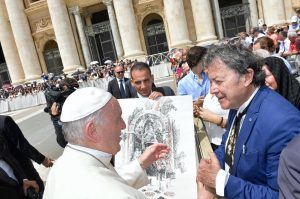 United States Sports Academy Sport Artist of the Year (1999, 2013) Charles Billich recently met Pope Francis during a visit to the Vatican City. Billich was commissioned to paint one of his famous cityscape pieces of the Vatican City.

DAPHNE, Ala. – Two-time United States Sports Academy Sport Artist of the Year and world-renowned contemporary surrealist painter Charles Billich recently had an audience with Pope Francis and was commissioned to paint one of his famous cityscapes in honor of the Vatican City.

Billich, one of the most famous and prolific living Australian painters, was named the Academy’s Sport Artist of the Year in 2013 and 1999, joining renowned painter Ernie Barnes as the only two artists to win the award twice. Born in Croatia, Billich now resides in Sydney, Australia.

“I am humbled that the Pope is going to guide me through this journey of painting the Vatican,” Billich told Sydney’s Daily Telegraph. “Having his blessing makes the painting so much more meaningful.”

Inspired by his Beijing cityscape, Billich conceived a series of images based on the Bing Ma Yong Terracotta Warriors performing various Olympic sports, which are also featured prominently at ASAMA.

In a career spanning more than 50 years, Billich has created work shaped by personal experience. His art has been featured in popular venues such as the White House, the United Nations (UN) Headquarters and the Vatican.  Billich won the Florence Biennale Lorenzo Il Magnifico Painting Prize at the 2009 Florence Biennale.

Billich created official images for the Australian and U.S. Olympic teams for Athens 2004 and exhibited at the UN Headquarters in New York. Hosted by the UN Friendship Club, Billich was invited back with his “Humanity United” collection in 2006. Billich also created “The World in Union,” the official image of the Rugby World Cup 2003. His piece “Humanity United” was created to commemorate the 2001 Centenary of the Nobel Prize for Peace. Billich was given the Olympic Gold Order by the French Ministry of Sport for his contributions to the French Olympic Team during the Sydney 2000 Olympic Games. He was named the Official Artist for the Australian team at the 1996 Atlanta Olympic Games.

Billich’s success as an artist is more remarkable given challenges he has had to overcome. In his early days, Billich was sentenced to 10 years in prison by the Yugoslav government for his satirical articles in a local magazine. He received amnesty after two years in prison and sought asylum in Austria, where he studied art in Salsberg. He migrated to Australia at age 21 and continued his studies there, later opening his own gallery in Victoria. Billich sought to channel his emotions onto canvas, resulting in complex, fascinating and sometimes provocative subject matter. His clear sense of modern style is easily recognizable to all who view his work. During the many twists in his life’s journey, Billich developed his craft and clarified his unique aesthetic view.