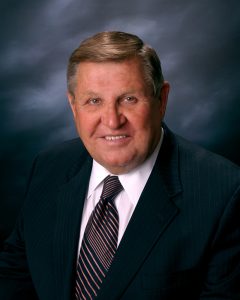 Former college football coach and long-time athletic administrator Jack Lengyel is the 2018 winner of the Tuss McLaughry Award, the highest honor given by the American Football Coaches Association (AFCA). Lengyel is a United States Sports Academy trustee emeritus, Academy Board of Visitors member and recipient of honorary doctorates from the Academy in 1998 and 2010.

DAPHNE, Ala. – Former college football coach and long-time athletic administrator Jack Lengyel has been selected for the Tuss McLaughry Award, the highest honor given by the American Football Coaches Association (AFCA).

Lengyel is a United States Sports Academy trustee emeritus, Board of Visitors member and recipient of honorary doctorates from the Academy in 1998 and 2010. He is also the former committee chairman of the Academy’s College Football Game of the Year program.

Lengyel will receive award in January during the 2018 AFCA Convention in Charlotte, N.C. The award is given to a distinguished American for the highest distinction in service to others. It is named in honor of DeOrmond “Tuss” McLaughry, the first full-time secretary-treasurer of the AFCA and one of the most dedicated and influential members in the history of the association. The award was established in 1964.

“I am humbled and honored to be selected for the American Football Coaches Association’s Tuss McLaughry Award, and to be associated with those legendary former recipients,” Lengyel said. “I want to thank my wife Sandy, my children David, Julie and Peter, for their dedicated support throughout my career. I stand on the shoulders of my former players, coaches, mentors, supporters and family, and share this award with each and every one of them.”

Lengyel, who began his career as the freshman football coach at his alma mater, Akron University, has been involved with intercollegiate athletics since 1957. His diverse career has taken him from the gridiron to the administrative ranks to the private sector.

As a coach, Lengyel served as assistant football coach at Akron (1959), Heidelberg College (1961-62) and Cornell (1963-65). He was named head football and lacrosse coach at the College of Wooster in 1966 and remained there for four years.

His greatest task and achievement as a coach was rebuilding the football program and community at Marshall University after the tragic airline crash in November 1970 that killed 37 Marshall football players, nine coaches, and 25 boosters. Lengyel was head football coach at Marshall from 1971-74 after the tragedy. Warner Brothers produced the movie “We Are Marshall,” starring Matthew McConaughey as Lengyel.

Following his three-year stay at Missouri, Lengyel was named director of athletics at the United States Naval Academy. Lengyel remained at Navy for 13 years from 1988-2001 and oversaw a 30 sport athletic department and was responsible for major sports facility new construction and renovations. During his tenure at Navy, Lengyel received a Lifetime Service Award from the Annapolis Touchdown Club (2001), appointed to the US Naval Academy Foundation Board of Trustees (2001) and the athletic training facility was named in his honor.

Following his retirement from Navy, Lengyel has been active as a consultant and serving in leadership positions in community and professional organizations. Lengyel has served as the interim athletics director at Temple University, Eastern Kentucky University and the University of Colorado. He has used his vast experience to provide strategic operational reviews and analysis for Towson State, Northern Arizona University and Texas State University at San Marcos.

Active professionally and within the community, Lengyel has served in leadership positions in the National Association of College Directors of America (NACDA), the Division I-A Director of Athletics Association, the National Football Foundation and College Hall of Fame, the United State Sports Academy, the College Football Association and the NCAA Committee Membership.

Lengyel earned his bachelor of science from Akron University in 1957 and has a master of education degree from Kent State University.