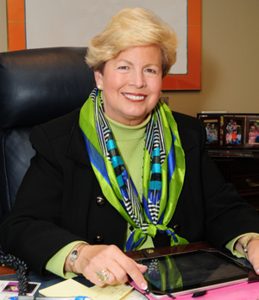 When the United States Sports Academy’s Board of Trustees met on 9 November to approve nominees for the institution’s 2018 Awards of Sport program, it chose one of its own for an honorary doctorate.

Each year as part of its Awards of Sport program, the Academy presents two honorary doctorates – one national and one international. Recipients are presented with a hood, citation, plaque, medallion and transcript signifying their honorary degree. The honorary doctorate is given for outstanding contributions to sport and society. This year’s national recipient is Academy Trustee and former University of Tennessee (UT) Women’s Athletics Director Joan Cronan.

Cronan has served on the United States Sports Academy Board of Trustees since 2014.  She also received the Academy’s 2011 Carl Maddox Sports Management Award, which is given annually to an individual for contributions to the growth and development of sport enterprise through effective management practices. Cronan also served as National Association of Collegiate Directors of Athletics (NACDA) President in 2008-09.

“The United States Sports Academy congratulates Joan Cronan on this well-deserved honor acknowledging her substantial contributions to sport, and we also appreciate her wise counsel and valuable service as a member of the Academy’s Board of Trustees,” said Academy President and CEO Dr. T.J. Rosandich.

Among her many accomplishments and awards, Cronan was the first female to receive NACDA’s Corbett Award since 2010 (Barbara Hedges, University of Washington) and the only recipient to graduate from LSU, the institution where the Corbett name became synonymous with the highest levels of success in athletics administration. The award is presented annually by NACDA to the collegiate administrator who “through the years has most typified Corbett’s devotion to intercollegiate athletics and worked unceasingly for its betterment.” Additionally, Cronan received an honorary degree from the Sports Management Institute (SMI), an educational institute sponsored by NACDA and the universities of Georgia, Michigan, North Carolina, Notre Dame, Southern California and Texas, and automatic induction into the NACDA Hall of Fame.

Cronan served as the women’s athletics director at Tennessee for 29 years until 2012. During her tenure, Tennessee expanded women’s varsity sports from seven to 11, the Lady Vols earned 10 NCAA titles and 24 Southeastern Conference (SEC) Tournament Championships and annual giving to support women’s athletics increased to $2 million per year. She prioritized academics with student-athletes, leading an initiative that stressed class attendance and engagement. As a result, female student-athletes earned an average 93 percent Graduation Success Rate during her tenure. Cronan also started a community service component that emphasized civic responsibility as part of an athletics experience at the university.

In 2017, Cronan was honored by the NCAA with the inaugural Pat Summitt Award, which recognizes an individual in the Association’s membership for positively influencing college athletes and their experiences through the individual’s careerlong commitment to advocating for college sports. Award recipients are selected annually by the NCAA President and receive a $10,000 honorarium to donate to the organization of the honoree’s choice that combats or researches neurological diseases of the brain. Cronan donated the funds to the Pat Summitt Foundation.

Prior to her NACDA Presidency, Cronan served as President of the National Association of Collegiate Women Athletics Administrators (NACWAA), now Women Leaders in College Sports, in 2007-08. During that time she was inducted into the Tennessee Sports Hall of Fame in 2008 and before that, she was recognized by NACDA as Southeast Region Athletics Director of the Year in 2003-04.

In 1998, Cronan’s work earned her accord from the Knoxville Sports Hall of Fame, as she was named its Administrator of the Year. In March 1987, the Women’s Basketball Coaches Association (WBCA) presented her with its leadership award. She also won NACWAA’s 1995 regional award.

Cronan joined UT from the College of Charleston in South Carolina, where she served as the athletics director for 10 years and was later inducted into that institution’s hall of fame. Under Cronan, the school was selected as the No. 1 women’s athletics program in the country in 1980 by the American Women’s Sports Foundation.

Cronan published her first book entitled, Sport is Life with the Volume Turned Up, in 2015. The book offers her refreshing and innovative perspective on strengthening performance and achieving success in both the business world and everyday life.

The Honorary Doctorate program is part of the United States Sports Academy’s Awards of Sport, which each year serve as “A Tribute to the Artist and the Athlete.” The Academy presents the awards to pay tribute to those who have made significant contributions to sport, in categories as diverse as the artist and the athlete in several different arenas of sport. The awards honor exemplary achievement in coaching, all-around athletic performance, courage, humanitarian activity, fitness, and media, among others. The Academy’s American Sport Art Museum and Archives (ASAMA) annually recognizes these men and women through its Sport Artist of the Year, Honorary Doctorates, Distinguished Service Awards, Medallion Series, Outstanding Athletes, and Alumni of the Year awards.