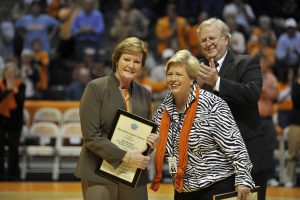 United States Sports Academy trustee Joan Cronan, the former women’s athletics director at the University of Tennessee, has been named the first recipient of the NCAA President’s Pat Summit Award.

Named after the longtime Tennessee women’s basketball coach, the Pat Summit Award honors an association member who has “positively influenced college athletes and their experiences through the individual’s career long commitment to advocating for college sports.”

Summit, who passed away in June 2016 after battling Alzheimer’s disease, received an Honorary Doctorate from the Academy in 2008. She also received the Academy’s 2011 Mildred “Babe” Didrikson Zaharias Courage Award.

“Pat Summitt’s interest was always the student part of the student-athlete first,” Cronan said. “She felt that her basketball court was a classroom, and she was a wonderful teacher. It’s wonderful that the NCAA will honor her not just for her coaching but for her making a difference, and that’s why I’m so honored to receive this award.

“When Pat told me that she’d been diagnosed with Alzheimer’s, she said that she’d always thought that she would be remembered for winning basketball games, but that she hoped she’d be remembered for making a difference in this disease,” Cronan said. “And this award, with the donation component, is going to allow us to do that.”

Summitt was the University of Tennessee women’s basketball head coach from 1974 to 2012. She amassed 1,098 wins — the most in NCAA men’s or women’s basketball history — eight NCAA championships and 32 Southeastern Conference titles. A five-time Naismith Coach of the Year, she also served as an associate athletics director at Tennessee and a member of the board of directors for the Women’s Basketball Hall of Fame.

She held these titles until she left to become the Director of Women’s Athletics at the College of Charleston, where she remained for 10 years before returning to the University of Tennessee in 1983.