Academy Welcomes Dr. Reginald Sykes and Chris Plonsky to Board of Trustees 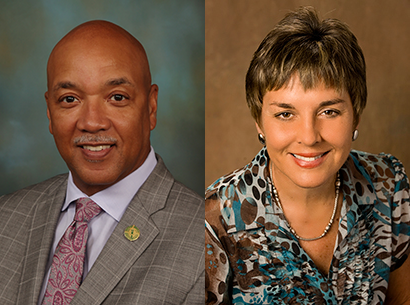 The United States Sports Academy is welcoming a pair of experienced higher education and athletics administrators to its esteemed Board of Trustees. Bishop State Community College President Dr. Reginald Sykes and University of Texas executive senior associate athletics director Chris Plonsky will be seated by the board when it holds its annual meeting in November 2020.

Sykes has served as Bishop State’s president since 2017 after serving one year in an interim capacity. A native of Meridian, Miss., Sykes previously served as dean of students at Meridian Community College for seven years, dean of student services at Mississippi Gulf Coast Community College – Jefferson Davis Campus for one year, and vice president of the Jefferson Davis Campus for five years. He also worked as president of Alabama Southern Community College and for the Mississippi Institutions of Higher Learning, serving as assistant commissioner for community and junior college relations.  He is an honorary member of Phi Theta Kappa International Honor Society and serves on their Presidential Advisory Board.

On the state level, Dr. Sykes is the former president of the Alabama Community College System Presidents’ Association and a member of the Alabama Community College Conference Athletic Executive Committee.  He is a board member of the United Way of Southwest Alabama, Trustmark Bank Advisory Committee, graduate of the 2019 class of Leadership Alabama, member of the Rotary Club of Mobile and the Atmore Chapter of Kappa Alpha Psi Fraternity. In his spare time, he enjoys hunting, fishing and playing golf. Dr. Sykes resides in Mobile, Alabama.

Plonsky is the executive senior associate athletics director and chief of staff at The University of Texas, where she has held various leadership roles for more than 30 years.

Plonsky is a USA Basketball board member and a member of the United States Olympic Committee’s Collegiate Advisory Council, which works to strengthen collaboration efforts between collegiate athletics departments and the Olympic movement to further support Team USA’s athletes and coaches. Plonsky is also an emeritus board member of the National Football Foundation and College Football Hall of Fame.

At UT, she served as women’s athletics director from 2001-2017. Between 1993-2017, she also supervised revenue areas in sponsorship, marketing, licensing and television for Texas men’s and women’s athletics. She worked in communications and media relations at Iowa State University (1979-81), Texas (1982-86) and The BIG EAST Conference (1986-90). After three years in administration at The BIG EAST as associate commissioner (1990-93), she returned to Texas in October 1993.

She is a past member of the NACDA executive committee, the Women Leaders in College Sports (formerly NACWAA) board and the LEAD1 board (formerly Division 1AD Association). Plonsky also has served NCAA committees on Academic Performance, Women’s Basketball Competition and NCAA Commercialization activities. She chaired the NCAA Division I Management Council in 2003.

A native of Pittsburgh, Pa., Plonsky earned her bachelor’s degree in journalism from Kent State University, where she was a three-year basketball player, undergraduate athletics media relations assistant and editor of the Daily Kent Stater.