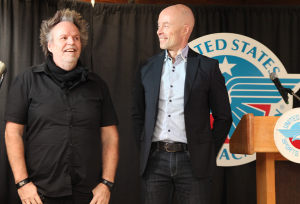 The United States Sports Academy continues to strengthen its relationship with its partners in Finland as it welcomed Finnish motorsport manager Atte Varsta and artist Rauli Mard to campus in December.

Varsta, an experienced entrepreneur in sports management, retail marketing and business planning, was on the Academy campus to join the institution’s National Faculty, a group of instructors credentialed to teach its post-secondary, non-degree international sports education programs abroad.

Varsta is the commercial director for Global Rallycross Europe, an all-European rallycross championship series based in Vienna, Austria. He is also a partner in V&V Sport Management, high-tech company Flexbright, and co-founder of ProFTraining Finland, which specializes in sports services and products that assist customers with their well-being.

Varsta is also the CCO of United States Sports Academy Finland, which launched in August 2018 after the Academy signed a cooperative agreement with ProFTraining Finland to provide educational opportunities to students seeking work in the health and fitness field in that country.

“I’m honored to join the United States Sports Academy faculty,” Varsta said. “To me it has always been not only a privilege but also a responsibility to share my experience and knowledge with students with interest in sporting science. When my other duties allow, I’m excited to teach the Academy’s international courses worldwide.”

Varsta holds a master’s degree in business administration and marketing from the University of Jyväskylä (Finland) and has studied at a doctorate program at Leeds Metropolitan University (United Kingdom).

Mard is famous for his art depicting motorcycles, cars, and airplanes and his portraits, many of which are crafted in front of the public. Mard visited the United States to attend the United Nations Ambassador Gala in New York, where he painted eye portraits and one live portrait of gala attendees at the event.

The artist uses his fingers to paint his portraits with 20-30 thin layers of water soluble artist crayons. His portraits of Heikkinen and Rivers are now on display at ASAMA. Heikkinen, who competes in rallycross and ice-driving events, won the Finnish Rallycross Championship in 2010 and the Global Rallycross Championship in 2013. Heikkinen’s portrait is the first piece depicting a Finnish artist to be featured at ASAMA. Rivers, a native of Athens, Ala., is the quarterback for the National Football League’s Los Angeles Chargers.

“I have done some research about famous Alabama athletes and I found Mr. Rivers,” Mard said. “I found him quite interesting. He has had a great career. And also, he is privileged to play in Southern California, my favorite part of the United States.”

Mard’s artistic career began in the 1980s in southern Finland, where he devoted his artistic output to symbols of sound – motorcycles, airplanes, racecars, loud heavy metal music. He painted musical instruments for musicians such as Iron Maiden lead singer Bruce Dickinson and James Hetfield of Metallica. Today, he continues to paint those loud objects like fighter jets, fast cars, but also paints portraits of famous athletes like Rivers and Heikkinen.

The artist has also become known for his eye portraits, in which he paints a subject’s eyes in a matter of a few minutes.

“I am fascinated by the secrecy behind the curtain of the eyes,” Mard said. “I studied their eyes, but I also study the whole person. I study their movements, their attitude, their voice even. You can tell a lot about a person from their eyes and their voice. The whole process takes just four or five minutes.”

Since its founding nearly a half-century ago, the Academy has leveraged its role and resources as a special mission sports university to make a global impact through quality sport instruction, research and service programs in 65 countries around the world. These contributions have varied in scope from the full-charge conduct of a nation’s entire national sport effort to individual coaching clinics, seminars, and symposia. Clients have included central sports organizations (CSOs, such as ministries of youth and sports), national Olympic committees, ministries of education (for physical education and interscholastic sport programs) and sport associations and federations. The Academy’s international includes some 50 Protocols for Cooperation with sports organizations or institutions of higher learning around the world.