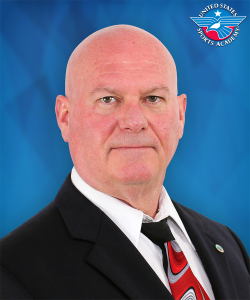 DAPHNE, Ala. – United States Sports Academy Chair of Sports Exercise Science Dr. Vincent K. Ramsey has been appointed to edit a special edition of the Journal of Functional Morphology and Kinesiology focusing on biomechanics.

Ramsey’s areas of expertise for the journal are biomechanics, clinical rehabilitation, restorative medicine, orthopedics, traumatic brain injury, tactical athletics and concussion education. He was recently appointed to the editorial review board for the journal, which is an international peer-reviewed open access journal that studies the musculoskeletal system and its associated disorders.

Ramsey will serve as guest editor of the special edition “Application of Biomechanics in Functional Rehabilitation.”

According to the Multidisciplinary Digital Publishing Institute (MDPI) – an academic open access publisher in Switzerland – the special edition is explained this way: “There are numerous acute and chronic conditions that can be assessed using biomechanical analyses. Conditions such as Parkinson’s disease, joint replacements, visual impairment, cerebral palsy, peripheral neuropathy and postural instability are but a few physiological impairments that can be evaluated via motion capture, force production and levels of muscle activation. The goal of this type of research is to bridge the chasm between theoretical findings and applied rehabilitation techniques.”

“It is a honor to be named as the editor for the special edition of the Journal of Functional Morphology and Kinesiology,” Ramsey said. “This issue will provide a platform for educators and researchers to submit articles describing the multitude of applications the field of biomechanics has to offer. Outcomes such as gait mechanics, muscle activation and sequencing, as well as the kinetics and kinematics of movement are but a few of the variables that can be applied to clinical rehabilitation interventions.”

Ramsey also reviews research papers for Publons, a website used by academics to track, verify and showcase peer reviewed contributions, and the MDPI.

Prior to joining the Academy, Ramsey spent four years as a lecturer at the University of North Georgia for the Department of Health and Physical Education and Recreation. He was also the CEO and a licensed massage therapist at Dynamic Therapeutics in Gainesville, Ga., where he provided medical massage, trigger point and myofascial release, and proprioceptive neuromuscular facilitation, as well as Swedish and cranio-sacral therapy.

At the Academy, Ramsey has been involved in an extensive program to reduce the impact of concussion on high school football players through education and medical intervention.