DAPHNE, Ala. – Nationally acclaimed track and field leader, coach and professor Dr. Dave Shrock has been named the United States Sports Academy’s 2017 Alumnus of the Year.

Shrock was presented the honor by Academy President and CEO Dr. T.J. Rosandich at the Academy’s 33rd Annual Awards of Sport celebration held recently on campus in Daphne, Ala. 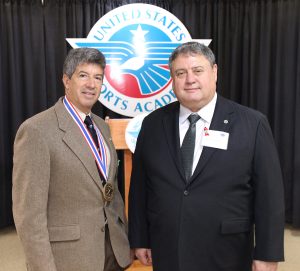 Nationally acclaimed track and field leader, coach and professor Dr. Dave Shrock, left, has been named the United States Sports Academy’s 2017 Alumnus of the Year. Shrock was presented the honor by Academy President and CEO Dr. T.J. Rosandich at the Academy’s 33rd Annual Awards of Sport celebration held recently on campus in Daphne, Ala.

The Alumnus of the Year Award is given to the year’s most outstanding Academy graduate and the honoree must represent the ideals of sport and of the institution.

Shrock has served in numerous leadership roles for USA Track & Field (USATF) and has coached track and field at various levels for more than four decades. He earned his Doctor of Education degree in sports management from the Academy in 2009.

He serves on the Academy’s National Faculty and has taught sports marketing and sports leadership for the institution’s international sport education programs in Thailand, Bahrain and the United Arab Emirates. He currently serves on the faculty at Modesto (Calif.) Junior College, where he coached track and field for more than 20 years.

“I accept this award on behalf of the alumni of the United States Sports Academy because we are the ones who utilize the knowledge, passion and experience gained from this great institution to continue to work for the betterment of sport,” Shrock said.

This summer Shrock was elected chair of the USATF National Associations Committee at the group’s annual meeting, where was also awarded the McGill Legacy Coaching Award, given annually by the USATF Coaching Education Committee, in recognition of his “passion and leadership nationally for the promotion of USATF coaching education.”

Shrock has served in numerous USATF leadership roles including president of the nation’s largest association, the Pacific Association; as USATF Coaching Committee chair; and as former vice chair of the USATF National Associations Executive Committee. He has educated more than 1,000 coaches throughout the country and directs track and field schools and clinics. His association work includes oversight of several national championships and hosting Olympic trials. His efforts have included coaching schools for youth, high school, college and elite levels.

Shrock has also coached internationally for USATF, having been selected to coach the men’s endurance runners at the World Indoor Track and Field Championships in 2012 in Istanbul, Turkey, and more recently as head men’s coach of the 2016 PanAm Cross Country team in Caracas, Venezuela.

Shrock has more than 40 years of track and field coaching experience, including 20 years as a college coach.  He began his college coaching career in 1976 at the College of San Mateo in his home town of San Mateo, Calif., before coaching cross country and assisting with track and field at Stanford and San José State universities. He coached Modesto Junior College to two Northern California Community College Championships and three runner-up finishes in track and field. He has been named a coach of the year 10 times and coached 64 junior college All-Americans.

In addition to his doctorate from the Academy, Shrock earned a bachelor’s degree in history and a master’s degree in kinesiology from San Jose State University.

The Alumnus of the Year Award is part of the Academy’s Awards of Sport, which each year honor a wide range of accomplishments in sport and serve as “A Tribute to the Artist and the Athlete,” in conjunction with the Academy’s American Sport Art Museum and Archives (ASAMA). The awards recognize these men and women through the Sport Artist of the Year, Honorary Doctorates, Medallion Series, Distinguished Service Awards, Outstanding Athletes, and Alumni of the Year awards.