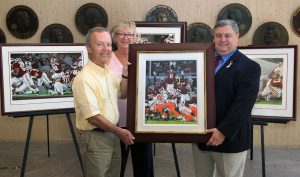 Fairhope, Ala., resident L.D. McLaughlin Jr. recently visited the American Sport Art Museum & Archives (ASAMA) on the campus of the United States Sports Academy and donated a “Perfect 10” set of 10 serigraphs, each signed and numbered #10 in a series, by 2011 Academy Sport Artist of the Year painter Rick Rush.

The serigraphs depict various noteworthy moments in the history of football at the University of Alabama. Rush, known as “America’s Sport Artist,” has gained a worldwide following for his colorful paintings that depict a variety of sports.

“I took a tour of ASAMA here recently and I was quite impressed with the wide array of art and the facility here,” McLaughlin said. “I have enjoyed this art at my home, and I thought it was time to let someone else enjoy it. These serigraphs are just so real, so lifelike. They have a great depth to them.”

“While ASAMA has been the beneficiary of donations to the collection from literally all corners of the globe, it is particularly meaningful to us that this gift comes from a resident in the local community,” Academy President and CEO Dr. T.J. Rosandich said. “While works by Rick Rush are already well represented in the ASAMA holdings, this particular gift is singularly unique given that they are all number 10 in the run of serigraphs and share a common theme; that of Alabama football. These factors truly serve to make this a distinctive addition to the collection.”

“The Academy and its museum are an artistic marvel for me,” Rush said. “The Academy has made sports art not just an aside but a primary genre of high art and fine art. The museum and what the Academy has done culturally around the world is marvelous, touching people and building an awareness of the world of fine art in sports.

“The Academy is impacting people and countries and cultures through the universal language of sport and art,” Rush said. “What a great work, coming together to develop cultural stability and integration around the world. It is a great platform.”

The Academy has prints of Rush’s works and other art available from the Academy bookstore at http://bookstore.ussa.edu/.