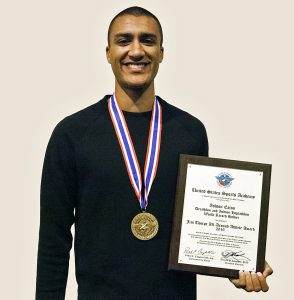 American decathlete Ashton Eaton, who won his second consecutive Olympic decathlon gold medal in the 2016 Rio Games, recently was presented with the 2016 Jim Thorpe All-Around Award from the United States Sports Academy at TrackTown USA in Eugene, Oregon. The award is given annually to an individual who has demonstrated outstanding achievement in multiple sports and/or events of the same sport.

DAPHNE, Ala. – American decathlete Ashton Eaton, who won his second consecutive Olympic decathlon gold medal in the 2016 Rio Games, has been presented the 2016 Jim Thorpe All-Around Award from the United States Sports Academy.

Eaton was presented with the award recently at TrackTown USA in Eugene, Oregon.

The Jim Thorpe All-Around Award is presented annually to an individual who has demonstrated outstanding achievement in multiple sports and/or events of the same sport. This individual should exhibit the qualities of versatility, strength, speed, flexibility, conditioning and training that exemplify superior athletic prowess.

This is the third time Eaton has been honored in the Academy’s Awards of Sport program, having won the Jim Thorpe All-Around Award in both 2010 and 2012.

After first winning gold in the decathlon in the 2012 Summer Olympic Games in London, Eaton defended his title as world’s greatest athlete by winning the event in the 2016 Rio Games. Eaton’s first place finish in Rio also tied the Olympic record, scoring 8,893 points to match the mark set by Roman Sebrle of the Czech Republic in 2004.

The Portland, Ore., native is a two-time Olympic champion and holds the world record in both the decathlon and heptathlon events. Eaton was a five-time National Collegiate Athletics Association (NCAA) champion, winning the 2010 Bowerman award given to the year’s best student-athlete in American collegiate track and field.  He attended the University of Oregon, where he was coached by the legendary Harry Marra.

Eaton’s first international award – a silver medal – came in the decathlon event at the 2011 International Association of Athletics Federations (IAAF) World Championships in Athletics held in Daegu, South Korea. In 2012 Eaton broke two world records – one in the decathlon at the Olympic Trials and one in the heptathlon at the World Indoor Championships.

The Jim Thorpe All-Around Award is part of the United States Sports Academy’s Awards of Sport, which each year serve as “A Tribute to the Artist and the Athlete.” The Academy presents the awards to pay tribute to those who have made significant contributions to sport, in categories as diverse as the artist and the athlete in several different arenas of sport. The awards honor exemplary achievement in coaching, all-around athletic performance, courage, humanitarian activity, fitness, and media, among others. The Academy’s American Sport Art Museum and Archives (ASAMA) annually recognizes these men and women through its Sport Artist of the Year, Honorary Doctorates, Medallion Series, Distinguished Service Awards, Outstanding Athletes, and Alumni of the Year awards.

Based in Daphne, Ala., the United States Sports Academy is an independent, non-profit, accredited, special mission sports university created to serve the nation and world with programs in instruction, research, and service. The role of the Academy is to prepare men and women for careers in the profession of sports. For more information about the Academy, call (251) 626-3303 or visit www.ussa.edu .

Founded in 1984, ASAMA is dedicated to the preservation of sports art, history, and literature. The ASAMA collection is composed of nearly 2,000 works of sport art across a variety of media, including paintings, sculptures, assemblages, prints and photographs. The museum is open free to the public from 9 a.m. to 5 p.m. weekdays. For more information, go to www.asama.org.