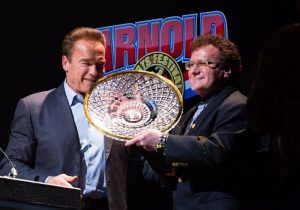 The award is presented annually to an individual who has made notable contributions to the fitness industry and offered lifetime of service to the enhancement of sports performance and promotion. Goldman was recognized for his numerous contributions to sport, including founding the International Sports Hall of Fame (ISHOF) and his long-time work in fitness and anti-aging medicine.

Goldman founded ISHOF in 2012 to honor individuals who have made outstanding contributions to sport and inductions are held each year at the Arnold Sports Festival in Columbus, Ohio. Arnold Festival co-founders Schwarzenegger and Jim Lorimer were among the inaugural ISHOF class, and Academy Founding President Dr. Thomas P. Rosandich was inducted in 2017 for his leadership in creation of the Academy.

“To be on the same stage as my personal heroes and mentors in Arnold and Jim Lorimer and to receive the same honor as Ben and Joe Weider, Jack LaLanne, Reg Park and so many others is such a tremendous honor,” Goldman said in receiving the award from Schwarzenegger.

“Anyone who really knows me knows I am a huge fan of achievement and achievers.  They also know how very special this award and what an honor it is to me. My life has been dedicated to sports, martial arts, health, fitness, medicine and teaching others.

“More than that, it is has been a commitment to inspire and motivate: encouraging sports participation and promoting a life of health, fitness, and wellness.  True success is making a difference in inspiring, helping others, and giving back.”

Other past winners of the award include actor-bodybuilders Sylvester Stallone and Lou Ferrigno, among other luminaries in sport and fitness.

A member of the World Hall of Fame of Physical Fitness, Goldman has made numerous contributions to health and fitness as a doctor and an athlete, including holding more than 20 world strength records and creating ISHOF. The Boca Raton, Fla., resident is recognized as a pioneer in anti-aging medicine, which combines cutting-edge research and the latest medical breakthroughs on longevity with the objective of increasing human life spans. Goldman has developed practical ways for integrating into daily lives information on how to live longer and healthier.

Goldman co-founded the American Academy of Anti-Aging Medicine (A4M) in the 1990s with Dr. Ronald M. Klatz. The organization now has 26,000 members and operates worldwide conventions and medical education programs that award board certifications and fellowship training in anti-aging regenerative medicine.

Goldman has spearheaded the development of numerous international medical organizations and corporations and taught at many national and international universities and centers, holding visiting professorships around the globe.   He is a Fellow of the American Academy of Sports Physicians and a Board Diplomat in Sports Medicine and Board Certified in Anti-Aging Medicine. He has chaired the International Medical Commission that oversees sports medicine committees in more than 184 nations and is President Emeritus of the National Academy of Sports Medicine.

Goldman in 2012 won the Academy’s Eisenhower Fitness Award, which is presented annually to a person who has shown outstanding individual or cumulative achievement in fitness and has contributed to the growth and development of sport fitness through outstanding leadership.    He also won the Academy’s Distinguished Service Award in 1990.

Goldman, who also previously served on the Academy Board of Trustees, recently was awarded an honorary membership in the World Head of Family Sokeship Council, the foremost collective group of accredited and internationally recognized martial arts masters and grandmasters in the world. He was also named a Living Legend World Martial Arts Ambassador and an Advisor to the World Martial Arts Alliance at the Elite Black Belt Martial Arts Society in Orlando, Fla.   He was given the rank of 7th Dan Black Belt by the All-Pro Tae Kwon Do Hall of Fame in Los Gatos, Calif., where her is a Hall of Fame member and recipient of the Living Legends Award.

Celebrating its 30th year, the Arnold Sports Festival in Columbus, Ohio, is the world’s largest multi-sport fitness weekend, with more than 80 sports and events drawing more than 20,000 athletes and 200,000 sports fans.  Held in early March, the festival is co-promoted by legendary bodybuilder and film star Arnold Schwarzenegger.