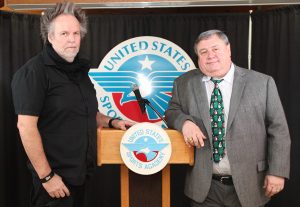 Mard is famous for his art depicting motorcycles, cars, and airplanes and his portraits, many of which are crafted in front of the public. Mard visited the United States to attend the United Nations Ambassador Gala in New York, where he will paint eye portraits and one live portrait of gala attendees at the event.

The artist uses his fingers to paint his portraits with 20-30 thin layers of water soluble artist crayons. His portraits of Heikkinen and Rivers are now on display at ASAMA. Heikkinen, who competes in rallycross and ice-driving events, won the Finnish Rallycross Championship in 2010 and the Global Rallycross Championship in 2013. Rivers, a native of Athens, Ala., is the quarterback for the National Football League’s Los Angeles Chargers.

“I have done some research about famous Alabama athletes and I found Mr. Rivers,” Mard said. “I found him quite interesting. He has had a great career. And also, he is privileged to play in Southern California, my favorite part of the United States.” 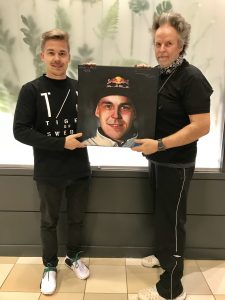 Mard’s artistic career began in the 1980s in southern Finland, where he devoted his artistic output to symbols of sound – motorcycles, airplanes, racecars, loud heavy metal music. He painted musical instruments for musicians such as Iron Maiden lead singer Bruce Dickinson and James Hetfield of Metallica. Today, he continues to paint those loud objects like fighter jets, fast cars, but also paints portraits of famous athletes like Rivers and Heikkinen.

The artist has also become known for his eye portraits, in which he paints a subject’s eyes in a matter of a few minutes.

“I am fascinated by the secrecy behind the curtain of the eyes,” Mard said. “I studied their eyes, but I also study the whole person. I study their movements, their attitude, their voice even. You can tell a lot about a person from their eyes and their voice. The whole process takes just four or five minutes.”