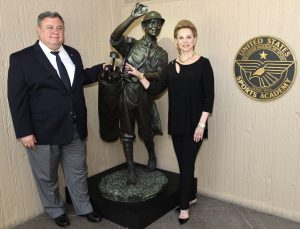 DAPHNE, Ala. – A life-sized sculpture of one of the most famous caddies in golf history now greets visitors to the United States Sports Academy thanks to a recent donation to the institution’s American Sport Art Museum & Archives (ASAMA).

Donated to ASAMA by Jupiter, Fla., real estate professional, golfer and artist Cary Lichtenstein and sculpted by renowned artist Clyde Ross Morgan, the bronze caddie – titled “Keep Yer Eye on the Ball” – was inspired by a famous incident at the 1913 U.S. Open in Brookline, Mass.  That was when the underdog 20-year-old amateur golfer Francis Ouimet was victorious over golf’s greats of the day after being encouraged by his 10-year-old caddie, Eddie Lowery, to “be sure to keep your eye on the ball.”

Ouimet won the U.S. Open title that year in a playoff against heavily favored professionals Harry Vardon and Ted Ray, the reigning British Open champion.  Ouimet was the first amateur to win the U.S. Open, a rare feat achieved by only five amateurs in history, the last occurring in 1933.

According to the Golf Channel, Lowery skipped school and arrived at the Country Club in Brookline the day the tournament began. Lowery offered his caddie services to Ouimet and eventually convinced him to let him carry his bag. Later, Ouimet would credit his U.S. Open success to Lowery’s inspirational quotes like “Keep yer eye on the ball!” and “You’re going to get a 72.”

According to Golf magazine, the 1913 U.S. Open was a significant moment for the establishment of golf in America. For starters, the magazine wrote that both Lowery and Ouimet grew up “on the wrong side of the tracks” but were able to make something of themselves through the game of golf. Ouimet was later enshrined in 1974 by the World Golf Hall of Fame, which wrote that his U.S. Open triumph “captured the imagination of sports fans across the globe, sweeping away the notion that golf was a stuffy game for the old and rich.” 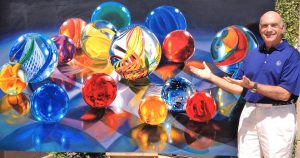 Lowery’s story was featured in the 2005 Disney film “The Greatest Game Ever Played.” Lowery would go on to become a wealthy automobile dealer in San Francisco, Calif., and would become known as a sponsor of young amateur golfers. He also served time on the United States Golf Association’s Executive Committee. Ouimet would go on to win two U.S. Amateur titles and captain six Walker Cup teams and become the first American to serve as captain of the Royal & Ancient Golf Club of St. Andrews.

“I was an avid golfer and always found Eddie Lowery’s story to be fascinating,” Lichtenstein said.

“I have always collected golf memorabilia and this sculpture was my prized piece. About 10 years ago I injured my back and was unable to continue playing golf, so I began to donate some of my memorabilia to charities.

“I knew this particular sculpture needed a special home, so I searched around for the best place and found the United States Sports Academy.  The Academy is home to some remarkable and special pieces of art, so I think Eddie will fit right in with the other works there. They’ve written books and made a movie about him because his story is wonderful. The sculpture captures that special moment in golf history.”

Morgan, of Sedona, Ariz., is famous for realistically portraying history, the emotion of human existence and the events of his own life in his bronzes. The artist’s passion for history is demonstrated in his endless quest for “the rest of the story” – the little known things that help bring a piece of sculpture to life.

Morgan’s sculptures are nationally and internationally acclaimed and are housed in both private and public collections around the world.