In Memoriam: Academy Mourns the Loss of Lynn Conkwright 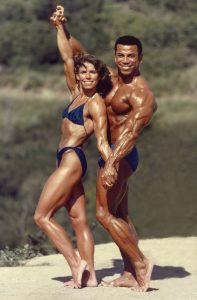 United States Sports Academy alumna and women’s bodybuilding pioneer Lynn Hadley Conkwright poses with partner Chris Dickerson in this photo from a 1988 Academy publication (USSA News). Conkwright and Dickerson, who won Mr. Olympia in 1982, both are members of the International Federation of Bodybuilders (IFBB) Hall of Fame.

The United States Sports Academy mourns the loss of alumna Lynn Hadley Conkwright, a women’s bodybuilding pioneer, who passed away at age 63 on 14 June 2017.

She became a well-known figure in bodybuilding after winning the 1981 International Federation of Bodybuilding and Fitness (IFBB) women’s and mixed pairs world titles. She competed in many of the early contests that were pivotal to the growth of women’s bodybuilding. She finished in the top 10 in the IFBB Ms. Olympia contest five times and won the title of NPC Miss Virginia Beach in 1980.

In 2003, Conkwright was inducted into the IFBB Hall of Fame. She had previously worked for bodybuilding industry mogul Ben Weider, the co-founder – along with brother Joe Weider – of the IFBB. While working for Weider, Conkwright managed the company’s contracted athletes, including former Mr. Universe Lou Ferrigno.