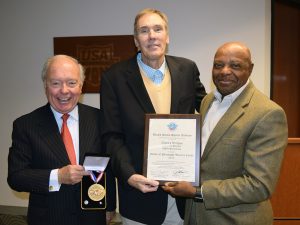 Charles “Chuck” Wielgus, Executive Director of USA Swimming, center, recently was presented the 2016 National Honorary Doctorate degree from the United States Sports Academy for his lifetime of service to the world of sport. The presentation was made at the USA Swimming headquarters in Colorado Springs, Colo., by William Hybl, President Emeritus of the United States Olympic Committee and Chairman and Chief Executive Officer of the El Pomar Foundation, left, and Walter Glover, Executive Vice President of the U.S. Olympic Endowment.

DAPHNE, Ala. – Chuck Wielgus, the longtime Executive Director of USA Swimming, passed away on Sunday in Colorado Springs, Colo., after suffering complications from colon cancer, which he had been battling since 2006. Wielgus was the recipient of the United States Sports Academy’s 2016 Honorary Doctorate for his lifetime of service to the sport of swimming.

To read the Academy’s coverage of Wielgus and the 2016 Honorary Doctorate, please visit: https://ussa.edu/news/usa-swimming-executive-director-chuck-wielgus-awarded-2016-honorary-doctorate-from-the-united-states-sports-academy/ (no longer available)