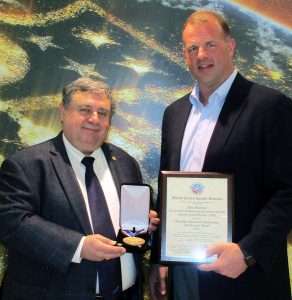 Former National Football League player and U.S. Congressman and current NFL Vice President of Football Operations Jon Runyan, right, recently was presented the United States Sports Academy’s 2017 Theodore Roosevelt Meritorious Achievement Award by Academy President and CEO Dr. T.J. Rosandich at the NFL offices in New York City. The award is presented to an individual in any amateur or professional sport, past or present, who has excelled as a contributor to both sport and society over at least a decade.

Academy President and CEO Dr. T.J. Rosandich presented Runyan the award recently at the NFL offices in New York City.   The Theodore Roosevelt Meritorious Achievement Award is presented to an individual in any amateur or professional sport, past or present, who has excelled as a contributor to both sport and society over at least a decade.

Runyan had a successful 14-year career in the NFL as an offensive tackle before serving the nation in the United States House of Representatives from 2011-15. Runyan now serves the NFL as vice president of policy and rules administration, where he oversees club and game-related initiatives related to players. He serves as NFL Commissioner Roger Goodell’s designee for on-field discipline and supervises the league’s uniform and protective equipment inspection program.

A native of Flint, Mich., Runyan earned a football scholarship to the University of Michigan, becoming the first person in his family to attend college. He earned All-Big Ten Conference honors as a tackle in 1995 and All-American honors in 1996. He was chosen in the fourth round of the 1996 NFL Draft by the Houston Oilers.  He later signed with the Philadelphia Eagles in 2000, playing nine seasons for Philadelphia. He earned Pro Bowl honors in 2002. He finished his NFL career with the San Diego Chargers in 2009.

Runyan retired from the NFL in 2010 and pursued a career in politics. He served New Jersey’s Third Congressional District in the U.S. House of Representatives from 2011-15, where he served on three key committees: The House Armed Services Committee, House Veterans Affairs Committee and House Natural Resources Committee. Runyan sponsored more than 15 pieces of legislation over the course of his tenure as a congressman.

Runyan is heavily involved in numerous charities and organizations that benefit the South Jersey/Philadelphia area, including the New Jersey Special Olympics, American Red Cross, Juvenile Diabetes Foundation, USO, Armed Forces Freedom Ride and Habitat for Humanity also serving on the advisory board for Solider Strong. He currently serves on the Board of Directors for the Alzheimer’s Association of Delaware Valley.

Runyan lives in Moorestown, New Jersey with his wife, Loretta, and three children.

The Theodore Roosevelt Meritorious Achievement Award is part of the Academy’s Awards of Sport, which each year honor a wide range of accomplishments in sport and serve as “A Tribute to the Artist and the Athlete,” in conjunction with the Academy’s American Sport Art Museum and Archives (ASAMA). The awards recognize these men and women through the Sport Artist of the Year, Honorary Doctorates, Medallion Series, Distinguished Service Awards, Outstanding Athletes, and Alumni of the Year awards.