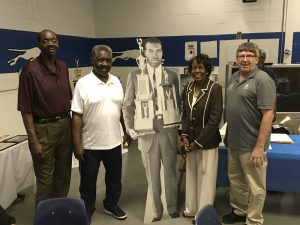 The late Bill Clark, a former United States Sports Academy trustee, was honored at a recent Mobile County Training School (MCTS) Alumni Association meeting. To honor his memory, MCTS presented a cardboard cutout of Clark, which will become part of an alumni display at MCTS. Pictured with the cutout are, from left are Theodore Spradley, MCTS alumnus and the father of Dr. Brandon Spradley, Academy director of sports management; Larry Shears, MCTS alumnus and a former collegiate All-American football player; Hattie Clark, the wife of the late Bill Clark; and Dr. Stephen Butler, Academy dean of academic affairs.

DAPHNE, Ala. – Former United States Sports Academy trustee the late Bill Clark was honored at the Mobile County Training School’s (MCTS) Alumni Association meeting recently. Clark, who passed away in 2015, served as a trustee from 2012 to 2015.

To honor his memory, MCTS presented a cardboard cutout of Clark, which will become part of an alumni display at MCTS.

In addition to his dedication to the Academy and its Board of Trustees, Clark was a retired member of the Alabama House of Representatives where he served 26 years. During that time he also served as the chairman of the Board of Commissions for eight years and the vice chairman of the Rules Committee for 16 years.

Mobile County Training School was founded in 1880 and it is the oldest county training school in Alabama. For many years it was a high school composed of grades 7-12. Renovations and additions were made in 1967 and the 6th grade was accommodated. The 1970-71 school term resulted in a change in the grade structure of the school. This reorganization transformed the school from a high school to a middle school.  It is located in Prichard, Ala.