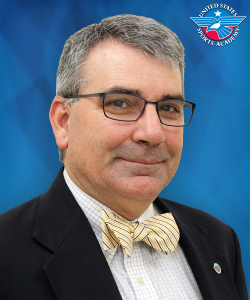 King’s paper, titled “Influence of a Coach Development Curriculum on Preservice Coaches’ Habitus,” analyzes the influences of a 4-year university-based coach development curriculum on coaching-students’ philosophy and constitution. As the Academy’s Chair of Sports Coaching, King has been instrumental in the development of the institution’s coaching education programs at both the domestic degree and post-secondary, non-degree levels.

“This is an important time for the field of coaching around the world, and it is equally important to grow the ranks of quality coaches in the United States,” King said. “No matter where you are in the world, people know that a good coach can mean the world to an athlete, from the youth sports level all the way to professional and international competition levels. Coaches are a critical part of every athlete’s experience.

“No matter where you go, everyone shares the view that what coaches do is important. There is, very obviously, a global need for good coaches and I’m pleased that the Academy has put itself at the forefront of coaching education.”

King was also recently elected to the board of directors of the United States Center for Coaching Excellence (USCCE). King will serve as the USCCE board secretary, a voting position which handles communications channels for the organization. The USCCE serves as a link between the International Council for Coaching Excellence (ICCE) and coaching educators in the United States. The Academy is an organizational member of both the USCCE and the ICCE.

The Academy also recently earned comprehensive accreditation for its Bachelor of Sports Science degree in Sports Coaching from the National Committee for the Accreditation of Coaching Education (NCACE), which works under the auspices of the USCCE. The accreditation signifies that the Academy’s coaching bachelor’s degree program is aligned with the National Standards for Sport Coaches (NASPE, 2006) and the NCACE Guidelines for program supervision, personnel and operations.