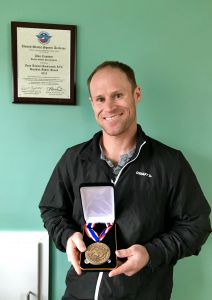 A native of Topeka, Kansas, Cnossen is a double-amputee after being injured by an improvised explosive device while he was serving in Afghanistan.

The Juan Antonio Samaranch IOC President’s Disabled Athlete Award is presented annually to a physically or mentally challenged athlete who displays courage, desire, and athletic ability in the face of adversity to achieve the goals set forth in the athlete’s particular arena of competition.

In September of 2009 Cnossen – a lieutenant at SEAL Team One – was serving in Afghanistan when he stepped on an improvised explosive device (IED) and was wounded in the explosion. The accident caused Cnossen to lose both of his legs just above the knees.

Cnossen went through rehabilitation first at the Bethesda National Naval Medical Center and later at the Walter Reed National Military Medical Center, where he learned to walk with his new prosthetics and was eventually introduced to cross-country skiing and biathlon.

Cnossen was awarded both a Purple Heart and a Bronze Star with Valor from the Secretary of the Navy for his service in combat.
Along with his activities as a Paralympian, Cnossen enjoys running, reading, traveling and surfing.

The Juan Antonio Samaranch IOC President’s Disabled Athlete Award is part of the United States Sports Academy’s Awards of Sport, which each year serve as “A Tribute to the Artist and the Athlete.” The Academy presents the awards to pay tribute to those who have made significant contributions to sport, in categories as diverse as the artist and the athlete in several different arenas of sport. The awards honor exemplary achievement in coaching, all-around athletic performance, courage, humanitarian activity, fitness, and media, among others.