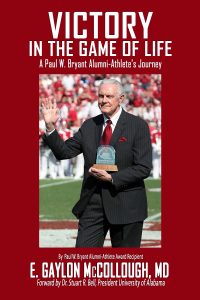 “What does it take to become a champion?”  In his latest publication, Dr. E. Gaylon McCollough answers this question and provides sage advice to competitors from all walks of life.

McCollough is a member of the United States Sport’s Academy’s National Faculty and recipient of its 2015 Theodore “Teddy” Roosevelt Meritorious Achievement Award. His wife, Susan McCollough, serves as an Academy trustee.

In 2017 McCollough received his alma mater’s Paul W. Bryant Alumni-Athlete Award. The honor is a function of the University of Alabama (UA) National Alumni Association.  Recipients are judged upon several criteria. He or she must be a UA alumnus and have participated in sports while a student. Nominees are judged upon “character, contributions to society, professional achievement and service to fellowman.”

McCollough is the author of 16 books, three of which are textbooks within his profession of facial plastic surgery.  In his latest publication the doctor provides a “warts and all” account of his own journey to victory in what he calls “The greatest game of them all — the game of life.”

McCollough’s memoirs chronicle his humble beginnings as the only son of a south Alabama plumber who overcame inherent limitations and setbacks to then proceed to the realization of never-expected accolades as an Academic All-American on Coach “Bear” Bryant’s 1964 National Championship team, draftee of the Dallas Cowboys, world-renowned facial plastic surgeon, mentor to the next generation of appearance and health enhancement physicians and surgeons and inductee of the State of Alabama’s Sports (and Senior Citizens) Halls of Fame.

Readers of McCollough’s latest publication will come away with a broader understanding of the role carefully selected mentors and a supportive life-partner play in the achievement of goals.  Moreover, readers will see how six-time National Championship Coach Nick Saban’s “Process” (of precision preparation and execution) is an extension of Coach Bryant’s winning methodology and the criteria associated with The Bryant Legacy.

In referencing “Victory in the Game of Life…” McCollough said, “Prior to submitting the manuscript to the publisher, I reached out to an ‘All-Star Team’ of pre-publication reviewers. Everyone contacted chose to join the team and returned nothing but positive comments. Each one consented to having their names added to the list of accomplished-in-their-own-rights endorsers.”

McCollough’s latest publication not only chronicles his own experiences in overcoming the challenges that life throws in the paths of competitors who choose to embrace excellence and reject mediocrity, it provides the encouragement and time-tested methods that ensure victory, regardless of the arena of competition.

As one reviewer wrote, “You won’t find many books that range from Elvis to Helen Keller to Bear Bryant to Sir Isaac Newton and more. And you won’t find many that can change your life. This one could.” (John Cochran, former White House Correspondent, ABC, and NBC television journalist)

Readers should also know that profits realized from the sales of “Victory in the Game of Life…” are pledged to the UA National Alumni Association and the Paul W. “Bear” Bryant Museum. Proceeds will further honor individual and team achievements memorialized by the Bryant Museum and the United States Sports Academy.

Proceeds from “Victory in the Game of Life…” obtained through the Academy will be shared in kind. The book can be ordered from the Academy bookstore by going to https://bookstore.ussa.edu/ and clicking on the gifts and accessories tab.