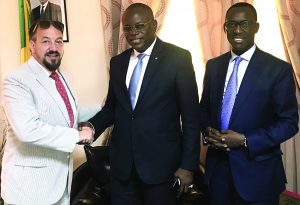 The Republic of Senegal and the United States Sports Academy have entered into discussions for the Academy to do a comprehensive assessment of Senegal’s national sport program as well as of how the Academy’s international education programs may be used as a tool for sports program development in the West African nation.  His Excellency Matar Ba (middle), Senegal’s Minister of Sport, meets with Academy Trustee Joseph Szlavik, and His Excellency Babacar Diagne (right), Senegal’s Ambassador Extraordinary & Plenipotentiary to the U.S.

DAPHNE, Ala. – The Republic of Senegal and the United States Sports Academy have entered into discussions for the Academy to do a comprehensive assessment of Senegal’s national sport program as well as consideration for how the Academy’s international education programs may be used as a tool for sports program development in the West African nation.

His Excellency Matar Ba, Senegal’s Minister of Sport, met recently in Dakar with Academy Board of Trustees member Joseph Szlavik, who shared his thoughts on how the Academy’s sport education expertise may best be used in Senegal. These discussions support the vision of Senegal President His Excellency Macky Sall to enhance the country’s national sport effort.

The meeting between Minister Ba and Szlavik was arranged by His Excellency Babacar Diagne, Senegal’s Ambassador Extraordinary & Plenipotentiary to the United States, who recently met with Academy President and CEO Dr. T.J. Rosandich in New York City. Ambassador Diagne provided Rosandich a general overview of sports in Senegal and the nation’s effort to develop youth as an investment in the country’s future. Rosandich shared with the Ambassador the Academy’s long history of sports development in some 65 nations around the world and the various ways the Academy can work with the country to reach its full potential in this vital area.  The discussion was held during the week the United Nations General Assembly was meeting in New York City.

Minister Ba and Szlavik reached an understanding that the Academy will undertake a thorough assessment of Senegal’s national sport effort to guide plans for the future development of sport in the country. The assessment will look at all aspects including facilities, infrastructure, programs and personnel.

“To maximize your national sport effort, you must have a thorough assessment of what exists, and the Academy looks forward to working with Senegal on this important initiative.

“This effort recognizes that the structure and function of sport can be a key tool in the development of youth,” Rosandich added.

“The important engagement of youth in sport in turn gives them the tools they need to be more productive as members of society.

“For instance, it is widely known that Senegal has many young people who have gone on to perform well in soccer, including the Premier League.  This shows what can happen when human capital is properly developed.

“The youth of the nation represent its future, and any investment in the future is a wise investment indeed.”

Founded some 45 years ago, the Academy has delivered quality sport education and service programs in 65 countries around the world. These have varied in scope from the full-charge conduct of a nation’s entire national sport effort to individual coaching clinics, seminars, and symposia. As a not-for-profit, independent school of sport, the Academy has been able to provide a combination of expertise expected from a sports university combined with the experience gleaned from applying this expertise in the field.