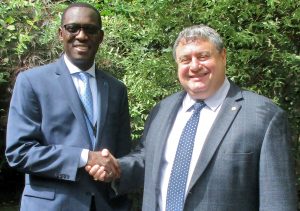 His Excellency Babacar Diagne, Senegal’s Ambassador Extraordinary & Plenipotentiary to the United States, left, recently met with Academy President and CEO Dr. T.J. Rosandich concerning youth and sports in Senegal and the various ways the Academy can work with the country to reach its full potential in this vital area.

The Republic of Senegal and the United States Sports Academy are exploring ways to work together to enhance youth sports in the West African nation and to use the power of sport to prepare young people for brighter futures as citizens.

His Excellency Babacar Diagne, Senegal’s Ambassador Extraordinary & Plenipotentiary to the United States, recently met with Academy President and CEO Dr. T.J. Rosandich in New York City concerning youth and sports in Senegal and the various ways the Academy can work with the country to reach its full potential in this vital area.  The discussion was held during the week the United Nations General Assembly was also meeting in New York City.

“The United States Sports Academy is pleased to be involved in these discussions with Ambassador Diagne, who recognizes that the structure and function of sport can be a key tool in the development of youth,” Rosandich said.

“The important engagement of youth in sport in turn gives them the tools they need to be more productive as members of society.

“For instance, it is widely known that Senegal has many young people who have gone on to perform well in soccer, including the Premier League.  This shows what can happen when human capital is properly developed.

“The Academy looks forward to working with Senegal and Ambassador Diagne on programs to fully realize the country’s potential in sport, and this begins with the youth. The youth of the nation represent its future, and any investment in the future is a wise investment indeed.”

Known around the world as “America’s Sports University,” the Academy is a sports university well versed in all aspects of sports as a professional and academic discipline, the institution has more than 40 years of experience providing sport education and service programs in some 65 countries around the world. The Academy has been particularly involved in programs related to youth sports.

The scope of services offered has been as varied as the full-charge conduct of an entire country’s national sport effort to special studies and assessment services. Clients of the Academy have included central sports organizations (CSOs, such as ministries of youth and sports), national Olympic committees, ministries of education (for physical education and interscholastic sport programs) and sport associations and federations. Many of the details of this work can be found by visiting the Academy’s website at https://ussa.edu/international/.