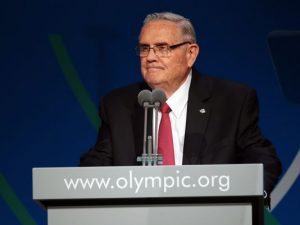 Don Porter has spent most of his adult life diligently promoting softball around the world and was an instrumental part of the movement to provide the sport’s players the opportunity to play on the world’s biggest stage as part of the Olympic program.

Porter now is sharing stories from his 30 year quest to internationalize the sport in a new book, “Inclusion/Exclusion: Softball’s Olympic Odyssey.”

Porter, who has served on the United States Sports Academy’s National Faculty and is a member of its Board of Visitors, said the book is scheduled to be released soon. It details his time in key leadership positions of the International Softball Federation (ISF), having served as secretary general from 1965 until 1987 and president from 1987 to 2013.

“The book is about my involvement with softball, about its history of moving in and out and back into the Olympic program,” Porter said. “It starts in the beginning, back when it was difficult to try and internationalize a sport that was mostly played at the rec level in many places. Today the sport is popular globally and is played all over the world.

“The book looks at the struggle over the years to first get softball recognized in the Olympic program, and then – after 2008 – to get it back in the program,” Porter said. “In 2005, the vote to remove softball from the Olympic program ended in a tie, which meant it would be dropped. I will say there is a lot of politics involved in these decisions, and the book covers that aspect. It also touches on the hoops we had to jump through to get it back in the program for Tokyo 2020.” 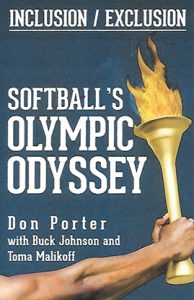 The WBSC was founded in 2013 and merged the ISF with the International Baseball Federation. Headquartered in Lausanne, Switzerland, the WBSC has 208 National Federation members in 141 countries with millions of athletes worldwide. The WBSC and its current president, Ricardo Fraccari, oversee all international baseball and softball competitions. Porter was the WSBC’s co-president from 2013-14.

“The Federation includes 141 countries that play softball, with millions of players,” Porter said. “The spread of softball to these other countries can be directly attributed to a lot of hard work by the ISF and the WBSC, which have worked hard to promote softball and baseball to people around the world.”

Porter, an Oklahoma City resident, hopes he will be able to attend the softball competition in person in Tokyo in 2020.

“You never know what the future holds but I do hope to be there in Tokyo for the softball,” Porter said. “It was a difficult time for softball fans after the sport was dropped, so it would be wonderful to see it again in the Olympics in person.”

Porter also served four seasons as an official with the National Football League from 1976 to 1979. Porter also served the United States Olympic Committee (USOC) as chairman and member of a number of committees including the Board of Directors from 1984 until 1998 and spent time on the USOC’s International Relations Committee. He is also credited as being one of the founders of the World Games.

In his service to the advancement of sport, Porter has also been a leader in the “Sporting Goods to Go” project, which has provided sporting equipment to those who don’t have it, especially in countries in the Middle East and Africa.   The effort has provided more than $30 million in equipment to more than 70 countries.  The program is overseen by SportAccord, the umbrella organization for all (Olympic and non-Olympic) international sports federations as well as organizers of multi-sports games and sport-related international associations.

Porter’s book is scheduled to be released soon by Tate Publishing of Mustang, Okla., who may be reached at www.tatepublishing.com or by phone at (405) 376-4900.