The public is invited to attend as the United States Sports Academy introduces its 2021 Sport Artists of the Year and unveils a work of sport art on its Daphne, Ala., campus, on Thursday, 11 November 2021.

Prolific sports painter Brian Fox and renowned sculptor Sergey Eylanbekov will be on hand to receive the Sport Artist of the Year – Zhenliang He Culture Awards during the program.

The ceremony is free and open to the public beginning at 6 p.m. on Thursday, 11 November 2021. The Academy’s campus is located at One Academy Drive in Daphne, Ala. A reception with heavy hors d’oeuvres will follow. Those interested in attending are encouraged to RSVP at (251) 626-3303 or email communications@ussa.edu, but reservations are not required.

The Academy had planned to recognize sport corruption investigator, clean sport campaigner, attorney, and sport law Professor Richard McLaren with the institution’s 2021 Honorary Doctorate award during the program. However, McLaren is unable to attend the program due to ongoing international travel restrictions and regulations related to the COVID-19 pandemic. McLaren does plan to visit the Academy to receive the Honorary Doctorate during its Founder’s Day event on 21-22 April, 2022. 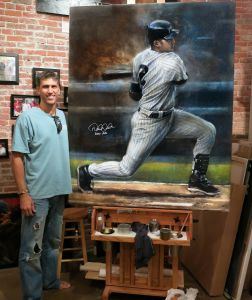 Because of his meticulous attention to detail and uncanny ability to capture the iconic expressions of his larger-than-life subjects, nationally renowned painter Brian Fox is the United States Sports Academy’s 2021 Sport Artist of the Year, Painter.

“Being recognized by a prestigious organization such as the United States Sports Academy is an incredible honor,” Fox said. “I am as humbled as I am grateful.

“Having been selected for this honor is truly one of the highlights of my career, especially given that I’m in the company of such talented artists as Stephen Holland and LeRoy Neiman—previous recipients—who have positively influenced my life’s work.”

Fox has exhibited his works in New York City, Boston, Los Angeles, and Lexington. His art is featured in numerous galleries around the country. Over the course of a 20-year career, Fox has also been able to forge relationships with celebrities, athletes and corporations, and charitable organizations. Because of those relationships, Fox’s work can be found in many corporate and private collections, including those owned by singer Steven Tyler, NFL quarterback Tom Brady and supermodel Gisele Bündchen, actor Mark Wahlberg, NASCAR’s Dale Earnhardt Jr. and many others.

One highlight of Fox’s career happened when, in anticipation for the 2010 Olympics and 30th Anniversary of the “Miracle on Ice,” the artist collaborated with Olympic hero Jim Craig to create a collection of original artwork commemorating the United States hockey team’s historic victory over the Soviet Union in 1980. The first release in the series was a portrait of Craig draped in the American flag. Fox was also commissioned by a private collector to produce a one-of-a-kind collectors portrait commemorating the 30-year anniversary of “Miracle on Ice.” The portrait was signed by all members of the 1980 U.S. Hockey Team, including Craig.

Fox’s work has been selected in the Society of Illustrators in New York and Los Angeles. The artist has also produced a series of original paintings exclusively for Walt Disney Parks and Cruise lines. Fox’s artwork exhibits and sells throughout the United States.

The Academy’s Awards of Sport program each year serves as “A Tribute to the Artist and the Athlete.” 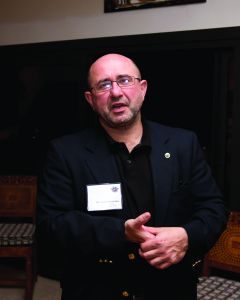 Russian sculptor Sergey Eylanbekov is a repeat Sport Artist of the Year honoree, having previously won the award from the Academy in 2004.

Eylanbekov is a renowned Russian-American sculptor whose works can be found in public spaces and private collections around the world. Born in Russia in 1960, Eylanbekov studied at the prestigious Moscow Surikov Academy of Fine Arts. After graduating with honors in 1984, he participated in many important exhibitions, from which several of his sculptures were acquired by the Russian Academy of Fine Art and the Ministry of Culture for permanent display.

The sculptor’s statues of Dwight D. Eisenhower and a group of paratroopers were placed on the National Mall in Washington D.C. in 2020 during a commemoration of the 75th anniversary of VE Day. . The scene sculpted by Eylanbekov depicts a moment when Eisenhower spoke to solders with the 502nd Parachute Infantry Regiment of the 101st Airborne division ahead of the Normandy invasion.

The Eisenhower pieces commemorate the man as Supreme Commander of the Allied Expeditionary Force in World War II, as 34th President of the United States, and as a Young Man. A 36-feet-long stone bas-relief serves as a backdrop for the bronze statues of general Eisenhower and the soldiers. It depicts Normandy coast on the day of the landing. The bas-relief was designed and carved by Eylanbekov and the team of stone carvers. A bas-relief represents a map of the world serves as a background for the sculpture of president Eisenhower with his advisers.

The memorial is located within a four-acre urban park on Independence Avenue, across from the Smithsonian’s National Air and Space Museum and adjacent to the U.S. Department of Education.

The 36-feet-long stone bas-relief serves as a backdrop for the bronze statues of general Eisenhower and the soldiers. It depicts Normandy coast on the day of the landing. The bas-relief was designed and carved by Eylanbekov and the team of stone carvers. A bas-relief represents a map of the world serves as a background for the sculpture of president Eisenhower with his advisers.

The memorial is located within a four-acre urban park on Independence Avenue, across from the Smithsonian’s National Air and Space Museum and adjacent to the U.S. Department of Education.

In 2004, his sculpture “Five Continents” officially represented the United States in the International Olympic Committee’s global Art and Sport Contest and was awarded first place. “Five Continents” was exhibited during the Olympic Games held in Athens, Greece, and is on permanent display at the Olympic Museum in Lausanne, Switzerland.

Since then, Eylanbekov has won numerous other contests and completed major public commissions. He created sculptures for the Peer Gynt Sculpture Park in Oslo, Norway, and the Hancock-Adams Common in Quincy, Massachusetts. Notably, his works have been exhibited at the Moscow Museum of Modern Art, the United States Sports Academy, and the United Nations.

Eylanbekov lives and works on Long Island, New York and in Pietrasanta, Italy. He is a Fellow of the National Sculpture Society and served on its Board of Directors.

An internationally recognized expert in sports law and arbitration, Professor Richard McLaren has spent his career working at the highest levels to protect the integrity of sports.

McLaren earned the Academy’s 2021 Honorary Doctorate award because of his body of work uncovering corruption in international sport – including his leadership on the WADA Commission, which investigated allegations of state-sponsored doping in Russian sports. His 2016 McLaren Report indicated systematic state-sponsored subversion of the drug testing processes by the government of Russia before, during, and subsequent to the 2014 Sochi Winter Olympics. McLaren’s follow up report, also in 2016, found that between 2011 and 2015, more than 1,000 Russian competitors in various sports – summer, winter, and Paralympic sports – benefitted from the program.

The report led to the suspension of Russia from all international athletic competitions by the International Association of Athletics Federations (World Athletics) and the 2016 Summer Olympics in Rio de Janeiro. Russian athletes were allowed to compete as neutrals in Rio and in subsequent Games in PyeongChang and Tokyo.

McLaren, a law professor at Western University in Ontario, Canada, is also member of the international Court of Arbitration for Sport (CAS) – the international body established to settle disputes related to sport through arbitration. In addition, he has also been a member of the ad Hoc Divisions of CAS at the Winter Olympic Games in Nagano, Japan in 1998 and Turin Italy in 2006; the Summer Olympic Games: in Sydney, Australia 2000; in Athens, Greece, 2004; and, in Beijing, China, 2008 and the Commonwealth Games in Manchester England in 2002.

McLaren has served with distinction as an arbitrator for the National Hockey League salary arbitrations and Player/Agent disputes for the NHL Players’ Association. He was appointed Chairman of the Independent International Commission of Inquiry on Doping Control to investigate allegations against certain American track and field athletes (Report July 2001) and served for six years as Chairman of the Association of Tennis Professionals (ATP) Anti-Doping Tribunal until 2006 when the ATP Doping Programme was transferred to the International Tennis Federation.

He participated in the Major League Baseball inquiry in to the use of steroids, which culminated in a Report in December of 2007. He is a member of the Anti-Doping Panel for the International Cricket Council based in Dubai and chairs the Doping Tribunal for the European Tour, which serves men’s professional golf. He is also a co-founder of Sport Solution, an athlete advocacy association funded by Athletes CAN located at the Faculty of Law, The University of Western Ontario. He is the incoming chair of the NSLI’s Board of Advisors. In 2011 he was appointed the President of the Basketball Arbitration Tribunal based in Geneva Switzerland and associated with FIBA.