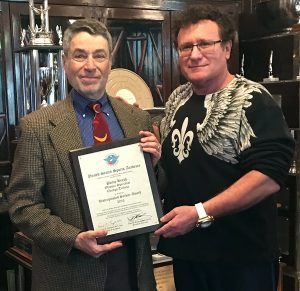 Long-time sports writer Philip Hersh, left, who specialized in Olympic and international sports coverage for the Chicago Tribune, is presented the United States Sports Academy’s 2016 Distinguished Service Award by Dr. Robert Goldman, chairman of the Academy’s Board of Visitors, on 18 April 2017 in Chicago, Ill.

DAPHNE, Ala. – Philip Hersh, a long-time sports writer for the Chicago Tribune, has received a 2016 Distinguished Service Award from the United States Sports Academy for his commitment to reporting on the global world of sport, including his notable coverage of the Olympic Games.

As part of its annual Awards of Sport program, the Academy presents the Distinguished Service Award to individuals who have made outstanding contributions to national or international sports through instruction, research or service. Those selected for this award must possess an extensive background in sports. This means that the individual must have had significant dealings in either instruction, research or service in sports for more than 10 years.

Hersh received the award from Academy Board of Visitors Chairman Dr. Robert Goldman recently at Goldman’s home in Chicago, Ill. Goldman is the co-founder and current chairman of the American Academy of Anti-Aging Medicine. Goldman was the Academy’s 2012 Dwight D. Eisenhower Fitness Award winner and is founder of the International Sports Hall of Fame.

“In addition to educating thousands of sports professionals as America’s largest freestanding school of sport, the United States Sports Academy has long been dedicated to honoring people like Mr. Hersh, who have made lifelong significant contributions to sport,” Goldman said.

“Mr. Hersh was gracious and expressed his appreciation for this award, which honors his many contributions to sports journalism that have been enjoyed by literally millions of people over nearly 40 years. His work has covered a wide range of sports, and consequently has captured the interest of a wide range of athletic enthusiasts. His writing has been a true public service.”

Hersh’s career at the Chicago Tribune began in 1984, and he quickly convinced his editor the newspaper needed a reporter dedicated to covering all aspects of the Olympics – sports, bureaucracy, politics – full time. For three decades and eight different Chicago Tribune sports editors, Hersh reported on events and issues on five continents and in 50 countries. Hersh is noted for using sports to write about the culture of a country or an athlete.

After leaving the Chicago Tribune in 2015, Hersh reported on the 2016 Olympic Games in Rio de Janeiro for TeamUSA.org and on his blog, “Globetrotting by Philip Hersh.”

Hersh wrote more than 6,200 stories for the Chicago Tribune and in his 2015 farewell column, he listed seven which stood out as his favorites. Among them were a 5,486-word profile of former Chicago Bears quarterback Jim McMahon, which appeared in the Chicago Tribune ahead of the 1986 Super Bowl, coverage of the Tonya Harding-Nancy Kerrigan figure skating saga in 1994 and a 1998 piece on women’s sports in Iran.

A graduate of Yale University with a major in French, Hersh was nominated for the Pulitzer Prize four times and earned multiple writing awards from the Associated Press Sports Editors and the Chicago Headline Club. He was also honored by the Chicago Society of Black Journalists.

The Distinguished Service Award is part of the United States Sports Academy’s Awards of Sport, which each year serve as “A Tribute to the Artist and the Athlete.” The Academy presents the awards to pay tribute to those who have made significant contributions to sport, in categories as diverse as the artist and the athlete in several different arenas of sport. The awards honor exemplary achievement in coaching, all-around athletic performance, courage, humanitarian activity, fitness, and media, among others. The Academy’s American Sport Art Museum and Archives (ASAMA) annually recognizes these men and women through its Sport Artist of the Year, Honorary Doctorates, Distinguished Service Awards, Medallion Series, Outstanding Athletes, and Alumni of the Year awards.

Founded in 1984, ASAMA is dedicated to the preservation of sports art, history, and literature. The ASAMA collection is composed of nearly 1,700 works of sport art across a variety of media, including paintings, sculptures, assemblages, prints and photographs. The museum is open free to the public from 9 a.m. to 4 p.m. weekdays. For more information, go to www.asama.org.