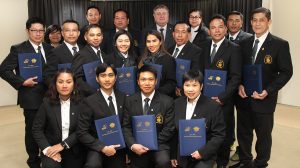 DAPHNE, Ala. – For the eleventh consecutive year, the United States Sports Academy recently hosted top college students from Thailand on a successful sports study tour of the United States designed to enrich their knowledge of sport.

The tour was conducted under the Academy’s International Certification in Sports Management (ICSM) and Sports Coaching (ICSC) programs in collaboration with the Sports Authority of Thailand (SAT).   The 2017 SAT Sport Study Tour, which ran from 4-16 September, provided 18 delegates with an up-close and in-depth look at American sports programs and facilities. The SAT is Thailand’s primary sports organization and plays a vital role in developing sport in the Southeast Asian nation

During the cross-country tour, the students visited California, including Stanford University and AT&T Park in San Francisco; the Utah Oval, Salt Lake City Olympic Park and representatives of the Utah Jazz in Utah; the United States Air Force Academy and the United States Olympic Committee Training Center in Colorado Springs, Colo.; the University of West Florida in Pensacola; and the University of South Alabama, Hank Aaron Stadium, and Daphne Strike Soccer Club Youth Soccer, all in Alabama.

As part of the study tour, the group visited the Academy campus in Daphne, Ala., where they attended workshops and made presentations about their observations related to the tour. On Friday, 15 September 2017, they were honored with certificates in a graduation ceremony, followed by a reception with the Academy faculty and staff

The delegation included students who were participating in the Academy’s ICSM and ICSM programs, which prepare participants for leadership roles in sport. The ICSC program includes a wide range of coaching and related administrative skills, while the ICSM program includes management topics such as sports event planning, facilities, and marketing and public relations. Under the program, approximately 50 students annually are drawn from the SAT and its affiliated sport organizations around the country to attend the certification courses in Thailand. Following the conclusion of the classroom portion of the program, the SAT annually selects the best students from each program for a special study tour of sport in America. A delegation of students and administrators from the SAT tour various sports organizations and venues for two weeks from coast to coast in the United States. 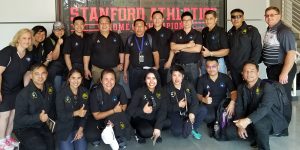 Jinda Dechpimol, the SAT director of human resources and study tour program director, said the tour allowed the students to see some of the best sports facilities in the states and gave them fresh ideas to take with them when they returned to Thailand.

“We had two groups – one from coaching and one from management – and each group was able to see the innovations here that we don’t have in Thailand,” Dechpimol said. “We were also able to experience the culture of sport in America and will take what we learned back to Thailand.

The delegation planned to travel to the Orlando, Fla., area to visit Walt Disney World, the University of Central Florida and Rollins College, but Hurricane Irma made landfall on the Florida peninsula the day they were scheduled to visit. Instead, the delegates were able to spend more time in and around the Academy campus. Dechpimol said spending more time on campus was beneficial to the students.

“At the Academy we were able to spend more time studying the details of the procedures we can use in coaching and training our players,” Dechpimol said. “We learned about how to organize practices, training for our players and managing sports events.” 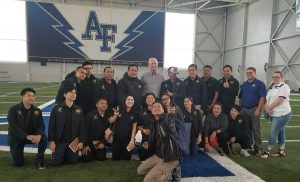 The Academy’s successful relationship with Thailand dates back to the mid-1980s.  During a visit to Bangkok in May 2015, Dr. T.J. Rosandich, then Academy vice president and chief operating officer and current president, renewed a Memorandum of Understanding (MOU) with the SAT to continue the ICSC/ICSM project for another five-year term through 2020.  Prior to the new agreement, the program had been held successfully since 2003.

“The United States Sports Academy and the Sports Authority of Thailand have had a long relationship with the ICSC/ICSM project and we are pleased that the brightest and best students in these programs are chosen to participate in the sport study tour hosted by the Academy,” Rosandich said.

“Our relationship with the Academy has benefitted us greatly over the years,” Dechpimol said. “Our coaches and administrators have gotten a lot of knowledge from the Academy – when its instructors come to us and when we come to the sports study tour – that we have applied in Thailand. We have been more competitive and successful in the Southeast Asia Games, the Asian Games and also in the Olympic Games.

“Because of what we’ve been able to do with the Academy, we plan to have more projects for coaches, referees and administrators and also, we hope to be able to bring our students here for a longer stay,” Dechpimol said. “We will also be able to be more successful in more sports in the Olympic Games. We have a few sports where we have earned medals, but we look forward to being able to be even more successful.”