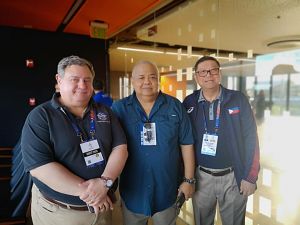 As an official observer invited by the Philippine Sports Commission (PSC), Rosandich was tasked with attending multiple events at different sites in the Philippines. He has been invited to return to the island nation in February, 2020 as one of two international participants in the Philippine National Sports Summit. The agenda at the conference will include a critique of the SEA Games as the nation looks toward charting a path forward in Philippine sports.

“At each of the venues visited, I was afforded to speak with the officials and the volunteers without whom the games simply could be staged,” Rosandich said. “The volunteers were well trained and the hospitality was very professional and accommodating. The workers there bent over backward to meet the needs of the people in attendance.”

The president’s observations at the SEA Games come as the Academy is moving forward with an agreement with the PSC to enhance the national sport effort in the island nation. The agreement marked the return of the Academy’s international sports education programs to the Republic of the Philippines, where it taught certification programs in the early 1980s.

Founded more than 45 years ago, the Academy has delivered quality sport education and service programs in 65 countries around the world. These have varied in scope from the full-charge conduct of a nation’s entire national sport effort to individual coaching clinics, seminars and symposia. As a not-for-profit, independent school of sport, the Academy has been able to provide a combination of expertise expected from a sports university combined with the experience gleaned from applying expertise in this field.

Clients of the Academy have included central sports organizations, (CSOs, such as ministries of youth and sports), national Olympic committees, ministries of education (for physical education and interscholastic sport programs) and sport associations and federations. Many of the details of this work can be found by visiting the Academy’s website at https://ussa.edu/international/.